The quality of football during this encounter could best be described as run of the mill, but the point that the R’s gained in this 1-1 draw was of vital importance for their promotion hopes.

True the standard from both sides was certainly mundane, however, this fixture was marked out by a couple of really bizarre incidents.

When Bolton took an early lead via their centre-half, John Hulme, his leap of celebration when the goal went in caused a leg injury, which subsequently resulted in his substitution.

The game then meandered its way to the half-time whistle with Rangers 1-0 down. During the interval the crowd was originally subdued and quiet until a young teenage blonde-haired QPR supporter decided to run on to the field and cavort in the centre-circle.

He was immediately confronted by a Bolton fan of about the same age and they briefly exchanged punches like something from a Henry Cooper/Joe Bugner boxing contest.

After much cheering and jeering from both sets of supporters, a steward stepped in to call a halt to proceedings and the culprits departed from the pitch just shortly before the players resumed the game for the second-half.

Rangers equalised through a close-range shot from Roger Morgan and Ron Springett made a superb save from Warwick Rimmer near the end, but the remainder of events were not really recording in my memory banks. 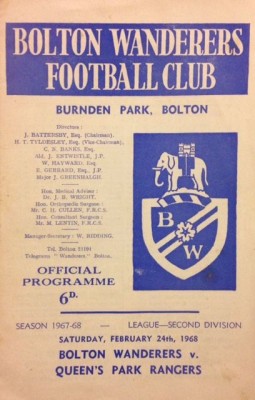 The following match report was written by Harold Hodgson and was obtained by Bernard from the Bolton newspaper archive:

‘The Burnden knockers gave Bolton Wanderers a thorough working over after the game with Second Division leaders Queen’s Park Rangers had ended in a 1-1 draw.

A brave band of soccer masochists seem to revel in tormenting themselves by dragging the Wanderers’ name through the mud. I suppose too many of them are still around that have been nourished on the memory of the Lofthouses, the Westwoods and the Vizards of long ago.

Certainly, I agree the game against Queen’s Park Rangers on Saturday was disappointing but for me the performance of the London club was the biggest let-down.

I expected far better from the chief promotion contenders and unless the Rangers can improve on this showing, I don’t see a great deal for them in the First Division – if they get there.

I thought the Wanderers just about deserved to win this one. In spasms they showed flashes of the best form and, particularly early on, they had the Queen’s Park defence floundering badly.

It is a long time since I have seen a rear-guard look quite as jittery and it was an elementary mistake, which cost the Rangers a goal after nine minutes. Centre-half John Hulme had the simple job of nodding home a Gordon Taylor corner.

Just imagine, leaving the opposition’s towering centre-half unmarked as he came up to the far post for a corner! Then, sadly, the Wanderer’s suffered an unexpected setback.

Hulme, leaping in delight in his success, twisted himself and had to leave the field for good a few minutes later. Brian Bromley took his place with Roy Greaves dropping back.

This seemed to upset the Wanderers’ rhythm, but even so they continued to hold sway until a little before the interval when Queen’s Park Rangers began to assert themselves, and the mercurial Rodney Marsh chipped in with a couple of low shots to test Hopkinson.

It is perhaps sufficient commentary on a shot-shy Bolton attack that the best home efforts came from Gareth Williams who fired over and wide. Gordon Taylor also had a drive saved by Ron Springett.

Straight from the re-start, Roger one of the indistinquishable Morgan twins, got the ball into the Bolton net but, in doing so, he went on long after the whistle had blown for offside.

He got his satisfaction after 52 minutes, however, when he deceived the whole of the Wanderers’ defence with a canny glancing header from an impossible angle to get the equaliser.

After this the Londoners became much more dominant as Bolton lost their balance to become vey ragged and even careless. Roger Morgan always the Rangers danger man, hit the side-netting and missed with another good chance.

Galloping Gareth Williams was still the Wanderers’ chief hope for a winner; he again was twice only fractionally off-target.

Ian Morgan had a good shot saved by the post but towards the end, the game swung round again finishing with Bolton on top and Springett bringing off marvellous saves from Freddie Hill and Warwick Rimmer.

On the whole the Wanderers’ defence did a sound job despite obvious lapses, which is too easy to ridicule at the expense of an individual player.

There was criticism for the way Roger Morgan was allowed to equalise but how much more culpable were the Rangers in the case of Hulme’s goal.

The attack continues to lack sufficient striking power. Taylor and Williams excepted, they simply did not get in enough shots at goal, although there is perhaps the excuse that they are playing without their recognised right-winger Terry Wharton.

But again, Roger Morgan apart, QPR were no great shakes in this department either.’ 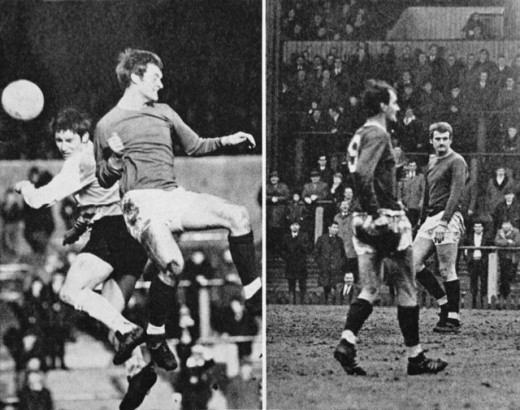 I travelled up to the match with my Dad’s mate and he parked up in a cobbled street near the ground. I can remember looking around and thinking that I was in ‘Coronation Street’.

At half-time, one of our supporters known as ‘Blondie’, ran onto the pitch and into the centre circle.

All the fans were cheering him except for a lone Bolton fan who ran on and squared up to him. ‘Blondie’ was getting the better of him, so another Bolton fan ran on as well.

Our boy stood his ground and got the better of the pair of them, cheered on by all the crowd.

As we began to set off after the game, 4/5 local skinheads saw my scarves hanging out the car windows and they started to throw stones and chase us up the road.

Although we could well have easily driven away, my Dad’s mate was not having any of it so he pulled up, got out the car to front them, which was more than enough for them to run off!

I had witnessed a 4-0 drubbing at Derby the previous week and travelled up to Bolton, once again, on a Supporters Club coach.

Rangers’ fans gathered under the covered stand in the South End of the ground, which had been our suggested HQ (‘Rally Round the Drum’) in the Palace home programme.

I don’t remember very much about the match, but I do recall the half-time incident and I think ‘Blondie’ may have been escorted back to our coach after the game?

Does anyone know who he was?