Ahead of Saturday’s trip to St. Andrews, I’m featuring the game played there on 11th March 1972. Tom Duckworth wrote the following comprehensive match report for a local newspaper:

‘Blues found goals hard to come by against Queen’s Park Rangers at St. Andrews. The Londoners provided spirited opposition and never allowed Blues to settle down to their usual fluent game.

Blues found chances hard to create against a well-marshalled defence, and only Malcolm Page really troubled Phil Parkes, the England under-23 goalkeeper, in the first-half.

Trevor Francis should have scored when left with only Parkes to beat, but shot wide of the far post.

Rangers were frequently dangerous and Dave Latchford saved brilliantly when Barry Salvage had a clear run for goal in the second-half. Mike Ferguson, the Rangers skipper, and Tony Hazell were both booked.

With Pendrey and Page both reporting fit, Blues were at full strength. Page recovered from his back injury, returned in place of Smith who became the substitute. 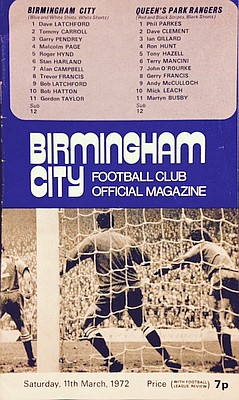 Both teams set a fast pace straight from the kick-off, and Blues looked dangerous in their first assault. Gillard had to nip back quickly and kick into touch as Francis and Hatton were bearing down dangerously upon goal.

Blues were inclined to over-kick their forwards in the early minutes and apart from one or two easy pick-ups by Parkes, Rangers’ goal was not threatened.

The award of a free kick to Blues five yards outside the penalty box held up the game a minute or two while Ferguson, Rangers’ new skipper, shouted instructions to his defensive wall. He himself failed to stand 10 yards from the ball, and, in the end, he was booked.

Blues won a number of free kicks and from one of these dropped into the goalmouth by Carroll, Hatton had a shot charged down, Latchford shot wide from the rebound.

After Latchford had fallen back and dispossessed Gillard to break up a left-wing move, Taylor brought the ball upfield and set Blues’ attack on the move. He passed to Campbell, who in turn released it to Hatton.

Hatton, attempting to cross the ball into the middle, had his centre blocked by Busby. From the flag-kick, Hatton was just wide with a header. Blues were fighting hard in attempting to force the game.

But they found Rangers, despite the loss of Marsh to Manchester City this week, lively opponents who were determined to give nothing away.

Trevor Francis receiving from a throw-in attempted a solo effort but found his path blocked by Evans just as he was about to shoot.

Quick marking and tackling by Rangers were allowing Blues little time and room in which to move, and many of the home team’s attacks were being smothered before they could get under way.

A quick break by Latchford, followed by an accurate pass to Francis, gave the youngster a chance to make ground down the wing, but he placed his centre too close to Parkes who saved easily.

Latchford was responsible for the best shot of the game in the 21st minute when a fine pass from Taylor gave him the space to go on and shoot. His powerful 20-yard cross-drive, skimmed the top of the bar.

Blues continued to find it hard going against a lively Rangers, and they were not finding their men with any accuracy. The Londoners were having their fair share of the play and caused Blues’ defenders trouble more than once.

Hynd had to dash across, dispossess Salvage and kick into touch to prevent the winger breaking through.

When Campbell made what looked a likely opening for Hatton, the quickness and anticipation of Parkes in getting to the ball prevented the Blues man getting to it.

Page made a splendid attempt to open Blues’ score after 30 minutes. He picked up a loose ball and from 25 yards drove hard and low for the far corner only for Parkes, who had advanced a yard or two from goal, to save brilliantly at full length.

The ball ran out towards the bye-line where Hatton, following up, tried an angle shot but the ball struck Evans and went out for a corner. This was the signal for a series of lively Blues attacks but Parkes and his defence stood firm.

Dave Latchford was given his first real cause for alarm when Salvage sent in an awkward low cross-shot which the goalkeeper could only push out to his left. But offside against another Rangers forward prevented the attack developing.

Blues should have gone one-up after 35 minutes when Latchford nodded a ball down to Francis who was right in the clear. Francis was left with only Parkes to beat, but he failed to hit his cross-shot cleanly and the ball sped across goal and out of play.

Rangers’ first scoring chance came when McCulloch attempted a first-time shot following a long free kick, but he miscued the ball and Dave Latchford saved as Francis followed up.

Rangers continued to fight hard and, as the interval approached, gave the Blues defenders an anxious time, Francis having a tremendous first-timer charged down.

Hatton forced a corner almost on the interval and Parkes was forced to turn Taylor’s in-swinging flag-kick over the bar. A free kick was awarded against Blues for an infringement on the goalkeeper. Half-time: Blues 0- QPR 0.

Blues went straight into attack from the re-start. Francis making a great run before passing to Hatton whose cross-shot was saved quite easily by Parkes.

Rangers continued to worry Blues with their aggression. When Hynd miskicked under pressure it was just as well that Taylor nipped in quickly to pass back to Dave Latchford.

In another spirited Rangers raid, Clement shared in a one-two with McCulloch before finally getting in a shot that caused Dave Latchford to go full-length.

Hazell became the second Rangers player to go into the referee’s notebook. He brought down Francis when the Blues’ youngster was tearing through at speed.

When Francis began another move, Pendrey finally passed to Hatton, whose high swinging centre was brilliantly intercepted by Parkes, who looked every inch an England under-23 goalkeeper.

Rangers fought back well and Harland had to come across to put the ball out of play after Ferguson had beaten Hynd. Then Salvage forced a corner on the other flank but Rangers, like Blues, were finding scoring chances difficult to create.

Dave Latchford came to Blues’ rescue with a first-class save after O’Rourke had left Salvage with a clear run through to goal. Latchford, advancing from his goal, narrowed the angle and fell on the ball when Salvage tried a cross-shot.

In the 66th minute O’Rourke, the former Coventry player, went off injured, and Leach took his place.

With the minutes ticking away, Blues put plenty of effort into their play in an attempt to force a goal. But their football was now marked more by desperation than anything else.’

I remember at the time thinking that the departure of Rodney Marsh signalled the end of the world!

However, Rangers completed the season on an unbeaten run (winning seven and drawing four of the final games) and finished in fourth place.

It was so tight that just three points separated us from the League Champions, Norwich City.