Gareth Ainsworth always played football with something of a rock ‘n’ roll like swagger. Those fans lucky enough to have been at the QPR away game at Rushden & Diamonds in August 2003 will recall his guitar twanging goal celebration after both of his two superb long range efforts that day – look them up on YouTube if you’ve never seen them. If you have then look at them again – we all need cheering up a bit at present!

Ainsworth’s love of rock music became well known during his time at Queen’s Park Rangers. Eyes were really opened that he was more than just a music fan for the first time at the May 2004 promotion celebration at Hammersmith Town Hall when he belted out Queen’s ‘We Will Rock You’ as part of the onstage celebrations at a venue I’d only previously visited to see The Fall play live nearly 20 years before in March 1985.

When Ainsworth soon afterwards became the singer with a band, Dog chewed the Handle (named after a Terrorvision song), many Rangers fans were not hugely surprised and he started to build up a reputation as being the front man of a good live act, in addition to being a very talented footballer.

Dog chewed the Handle called it a day and Ainsworth signed for Wycombe Wanderers in 2009, six years after joining Rangers as a player in July 2003.
In September 2012 he became Wycombe’s manager and has since carved out a reputation as a well respected up and coming manager. He has kept relatively close ties with QPR and was inducted in the Forever R’s Former Players group during the Wolves home game this season.

Many Rangers fans nominated him as someone that the club should at least interview for the vacant manager’s position when Jimmy Floyd Hasselbaink lost his job in November 2016. Maybe one day…..

On the music front, Dog chewed the Handle came to an end. Ainsworth’s next band, Road to Eden, came and went and The Cold Blooded Hearts have now played four gigs over the past year since their live debut in December 2015.

Earlier on the day of the Uxbridge gig, Ainsworth’s Wycombe team won their eighth match in a row with a 1-0 home win versus Leyton Orient. A quick drive down the M40 saw Ainsworth and the band arrive in a white Ford Transit – ready to sound check with a run through of the Undertones ‘ classic from 1978 ‘Teenage Kicks’. 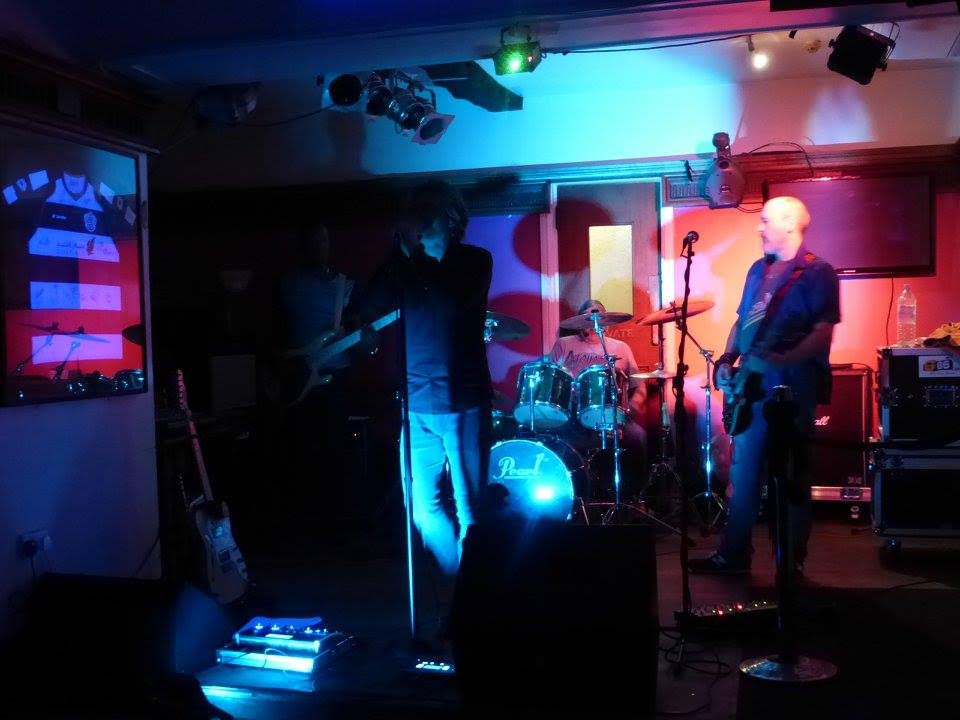 The gig was billed as being three separate sets starting at 9pm and running through to 1am. The first set of mainly band written originals opened with a song called ‘New Star’ with Gareth’s introduction that it was written the week after the death of Rangers’ up and coming young player Ray Jones.

Jones died in a fatal head on crash with a bus in August 2007, just three weeks after he had passed his driving test. At the time Jones’ death had a big impact on both the players and supporters of QPR and Ainsworth’s song reflects what a sad loss his death was.
Later in the set Ainsworth belted out a cover of The Animals’ ‘We Gotta Get Out Of This Place’ after five other original songs before leaving the stage for half an hour between set breather.

The second set of the evening commenced with some much needed stage lighting having been rapidly set up in a venue that has a signed and framed QPR shirt on the wall alongside the stage. That has to be unique!

With an early start required the next morning to get to the noon kick off home game versus Aston Villa, I had to leave after the second set of a very enjoyable evening.
If you enjoy good rock music with a mixture of originals and some well chosen covers, then The Cold Blooded Hearts are highly recommended. Check out the band page on Facebook for more details plus their forthcoming gigs. There are also some videos of the band on YouTube.