The Queen’s Park Rangers Supporters Club team took on a Charlton side in the Falkland Cup Final on Sunday, 1st May 1966 at Ilford FC.

The game kicked-off at 11am and the match programme included the following pen pictures of the QPR squad:

(a) – T. Wall (goalkeeper). Started the season as centre-forward. Put in goal in emergency. Played for W. London Schools.

(b) – N. Sells (right-back). Came into the side halfway in season as outside-left, moved back with great success. A good tackler. 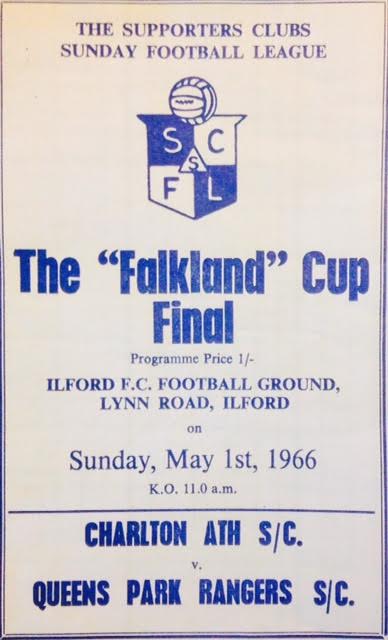 (g) – B. Sheridan (outside-right). Youngest member of side. Fast with good shot, only missed one game this season.

(i) – B. Hunt (centre-forward). Started the season as goalkeeper, moved to centre-forward after injury. Leading goalscorer.

Rangers were triumphant with P. Wall scoring the only goal of the game.

(My thanks to Sammy for his assistance)