Taddy & Co. produced three sets of cards in their Prominent Footballer series: 1907, 1908 and finally 1913. The first series has already been featured and this particular card is the third from the second series that was issued in 1908. 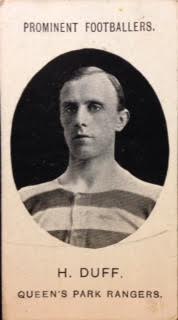 Rangers signed Harry Duff from Manchester City and he made his debut on 7th September 1908 at the Park Royal Stadium against Watford. He went on to make 22 appearances for the first team before moving on to Motherwell in May the following year.

Essentially a centre-half, Harry also played at left-half. He signed for Airdrie in September 1910 and one year later moved to St. Mirren. Harry was placed on the transfer list in May 1912 and one month later he was snapped up by Kilmarnock.

If anyone knows what happened to him after that, please get in touch.