In view of the fact that the venue for this fixture was only six miles from where I live, I thought I would go along and witness my first QPR Youth Team game for over 50 years.

Leigh Sports Village is the home of the Leigh Rugby League Club but Manchester United do play a lot of their reserve and youth matches at this location. The complex boasts a modern state of the art stadium with an excellent playing surface, which held up well despite the recent horrid Lancashire wet weather.

This 2-1 defeat after extra time was certainly no disgrace. The R’s players gave everything and battled every inch of the way against the behemoth youth team organisation/set-up from Old Trafford. 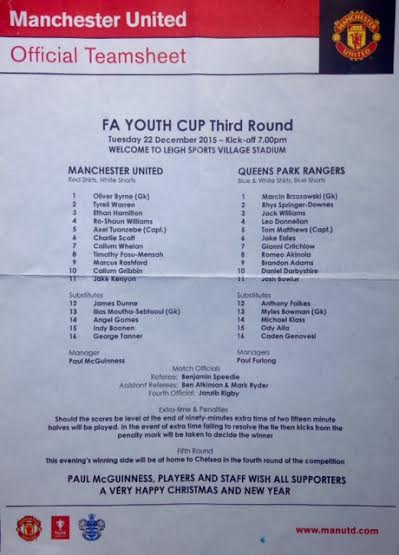 In the first-half there was nothing to choose between the sides. Rangers matched United in all aspects of the game, in every department and every area all over the pitch. There were chances at both ends but the half-time score was deadlocked at 0-0.

After the interval, United put Rangers under the cosh and we were struggling as an attacking force. Never the less we continued to dig in and you could clearly see that the attitude was one of no surrender.

Eventually United took the lead with a close range effort following a corner. It looked all over there and then but no it wasn’t! In a rare second-half QPR attack, the R’s equalised after 77 minutes from a messy scramble inside the goalmouth.

At first the ref and linesman disallowed it but after they both had a subsequent discussion the goal stood, 1-1 and it looked from my vantage point at the far distant end of the ground that this could even have been an own goal? The goal was credited to Ody Alfa.

The home side were stung into further action by this equaliser, which in truth, was then against the run of play.

In extra time, United regained the lead after 93 minutes following a penalty converted by Marcus Rashford after keeper Marcin Brzozowski had brought him down inside the box when clean through.

Rangers were continuing to come under pressure but they never folded one iota and nearly got a second goal right at the death, which would have taken events to a penalty shoot out.

Well done the QPR Youth team. Be proud of that performance.

Manchester United will go on to play Chelsea at home in the 4th Round.