The following servicemen had at some time in their careers, played for Queen’s Park Rangers and all tragically lost their lives serving their country:

Corporal Albert ‘Ben’ Butler – Apart from playing for QPR, he was also the first professional footballer in the ranks of the 17th Middlesex to be killed in action.

Albert Bonass – He joined the R’s in 1939 and later became a reserve policeman before joining the RAF. Between 1940 and 1945 he guested for a number of clubs including; Fulham, Watford and Southampton, but lost his life when his Stirling bomber crashed in Yorkshire during a training flight in 1945.

Alan Fowler – Alan guested a few times for the R’s during 1940/41 and also in 1943/44, but was actually on Swindon Town’s books. Sgt. Fowler served in the Dorsetshire Regiment and lost his life in July 1944 following the D-Day landings.

Evelyn Henry Lintott – He scored on his debut for Woking and went on to appear alongside four of his brothers. Lintott later attended Teacher Training College in Exeter. After graduating he took up a teaching position in Willesden and signed for QPR as an amateur.

Our first full England international, Lt. Lintott was killed whilst leading his men of the 15th West Yorkshire Regiment on the first day of the Battle of the Somme.

One of his brothers, Keith, had made four appearances for Woking before emigrating to New Zealand. Aged 21, he enlisted as a Sapper with the NZ Engineers and was apparently killed by either his own supporting artillery or possibly by a British tank during the Battle of Flers-Courcelette in September 1916! 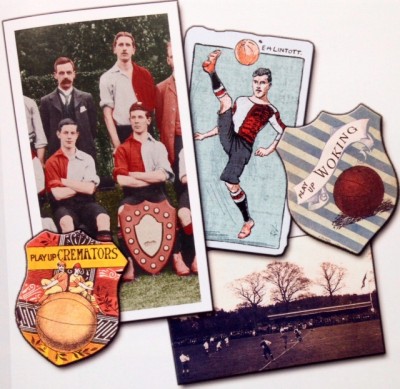 Frank Cannon – He began his career with Hitchin Town whilst working for a firm of solicitors. After making 29 appearances for the Rangers he moved on to West Ham. Later he served with the Bedfordshire Regiment before transferring to the Essex Regiment, rising to the rank of Sgt. Major. Frank was killed by shrapnel at Ypres on 15th February 1916.

Joseph Dines – Apart from winning more than 30 amateur caps for England, he also played in all three matches in the 1912 Olympics in Stockholm for the Great Britain team, which won him a gold medal. Joseph was one of three brothers to enlist but only survived hostilities for eleven days. He was cut down on the Western Front by machine gun fire on 27th September 1918.

Albert Edwards – Made 17 1st team appearances for QPR. Albert also played for Bristol City and Newport County, but lost his life in the Great War.

Oscar Horace Stanley Linkson – Oscar sadly lost his life on 8th August 1916. His mother never accepted that her son was dead, choosing to believe that he had run away to escape what she believed to be an unhappy marriage.

Harry Vernon Thornton – He made 37 appearances for the Rangers and scored 10 goals. Harry was one of many other players to join the Footballer’s Battalion and later died in France.

John H. Pennifer – Arrived at QPR in 1913 and after just three appearances, he enlisted the following year. John was one of the many fatalities at the Battle of the Somme.

Corporal John Tosswill – John made three appearances for the Rangers before joining the Royal Engineers. He became a dispatch rider and returned home after being wounded. Sadly he passed away, aged just 24, on the operating table in Eastbourne Military Hospital on 28th September 1915.

Dennis Higgins – He played 30 times for QPR and joined the Sportsmen’s Battalion. Dennis eventually became an officer but was so badly injured at Ypres in Flanders that he never played again.

It has also come to light that Robert McLaren Law was sadly another former Rangers player that tragically lost their life fighting for their country. His lone QPR appearance was against Plymouth Argyle in the final Southern League game of the 1910/11 season.

Private Law later served with the 4th Battalion Cameron Highlanders and was killed on 18th May 1915. The Glasgow Herald wrote the following about him two months later:

‘Private R McL Law, 4th Camerons, has died from wounds. In Civil Life he was employed with the British Legal Insurance Company and transferred to London about six years ago.

He joined the Army in London. Private Law who was only 24 years of age was a well-known member of Bellahouston Harriers and while in London played football for Queen’s Park Rangers. His father resides at 19 Allison Street, Glasgow.’

Acting Corporal David Barnsdale – 33 Engineer Regiment (Explosive Ordnance Disposal). He was the same age as Tom when he was killed clearing explosive devices. His parents laid a wreath on the Loftus Road centre circle prior to the Burnley home game in 2010.

(I’ve taken the above pic from the 2014 Woking FC Commemorative Programme: ‘Silent Night’ together with some of the Evelyn Lintott details. My thanks go to Colin Woodley and Gordon Macey of course)