It was great to meet up with so many in the Crown & Sceptre before the match; Steve R, Pat Harrison, Saycey, Bungers from Aberdeen, Paul Finney, ChrisPTenner and also Martin and Bill Elkins after the game.

In fact I met up with almost as many people last weekend as there were Preston North End defenders out on the Loftus Road pitch!

Right from the kick-off, Preston played for a 0-0 draw and we didn’t really have the know-how to do anything about it. I thought that we played quite well in the first-half but after the interval we faded badly and were poor.

Beforehand I was confident that we could beat Preston on our own ground because they are not a very good Championship side. Sadly it was not to be.

I went to the Conni before the game and the White Horse afterwards. As for the match, we played well for the first hour.

What I was pleased about was that we played proper passing football, which was a change from the hoofing the ball game we had been playing previously this season.

Junior Hoilett played for that period like a man possessed, I can only think that Neil Warnock had put his hand around his shoulder and gave him the ‘Taarabt hug’.

But even with all our possession, we never made any decent chances. Charlie Austin was totally marked out of the game with Leroy Fer, who played just behind him and was just not in the match.

Second-half, Sandro went off, Fer dropped back to midfield and Emmanuel-Thomas joined Charlie up front. I had been hoping that Neil Warnock would play both of them from the start, but when Emmanuel-Thomas came on, we stopped playing our passing football and lost control of the game and it became very scrappy.

Overall, there were some positives, but it was a very poor result. 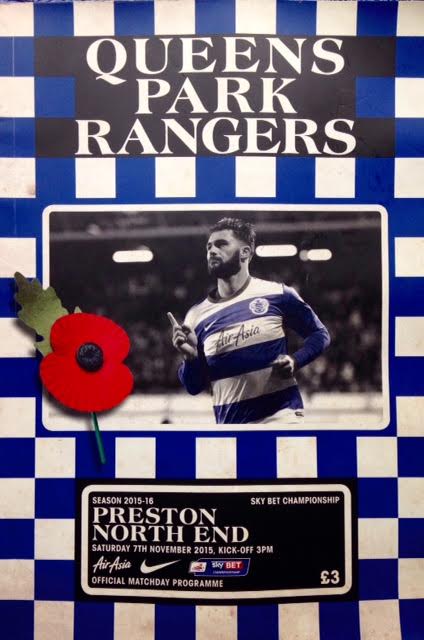 Manager-less QPR failed to win for the third successive match as Preston North End secured a point in the Championship at Loftus Road. Neil Warnock took temporary charge of QPR after Chris Ramsey’s dismissal but his side struggled in front of goal.

In a tepid first-half, Sandro came closest to opening the scoring for the hosts when he fired over from range.

In a quiet first-half, the visitors could have taken an early lead when Paul Gallagher sent a corner into the box, which Joe Garner latched onto, but Grant Hall cleared.

Sandro almost gave QPR the lead when his long-range shot went just over the bar, before Junior Hoilett teed up Charlie Austin, but his effort went wide.

Preston could have gone in at the break ahead when Gallagher again set up Garner, but his volley flew over.

After the break, QPR applied early pressure and were almost rewarded when Austin laid the ball onto Hoilett, but his scuffed shot was scooped up by Jordan Pickford.

North End broke back and, after Hall’s headed clearance, the ball fell to Adam Reach who fired wide before Wright almost sealed it with a header from Gallagher’s looping ball.

QPR interim head coach Neil Warnock: “I’m going to enjoy it for however long I’ve got it – it’s better than being sat at home or fishing. Just being around the fans and the club again is fantastic. When I was asked to do it I had no hesitation.”

“I don’t know whether it’s going to be one game, two games or whatever, but I’m going to enjoy it and if I can I’m going to try to help them pick. I hope they ask me. They surely will ask my opinion. I think you need someone who knows the Championship. It’s the toughest league in Europe.”

“Goalscoring is a bit of a problem at the minute, but we’ve got two weeks during the international break to try to sort that out.”

Good meet-up in the Crown & Sceptre before the game with the only downside being no ‘London Pride’ for me due to the antibiotics!

Rangers started off positively and Karl Henry did well filling in at full-back. Junior Hoilett also impressed particularly in the first-half. Few chances but we did appreciate some good passing movement and interplay.

The game did deteriorate after the break as the visitors increased their intent to play for a draw. That said, Preston came very close to stealing all three points but for Robert Green.