My latest meet-up with Bill Burnett was in the Packhorse & Talbot, another historic pub in the Chiswick High Road. There is an interesting plaque close to the bar (and replicated on the wall outside), which reads as follows:

‘The Packhorse & Talbot was simply called the ‘Pack Horse’ between 1698 and 1811 and was frequently confused with the other ‘Packhorse’ on Chiswick High Road.

The current name was probably an amalgamation of two licenses and it has been suggested that the “Talbot” would have acted as a guard dog to a traveller with a “Pack Horse”.

Before the canals and railways, horses were used for heavy transport of corn and wood and Chiswick High Road was a main entry to London. The packhorse men used the Inns along the River Thames at regular intervals and many were named for them. 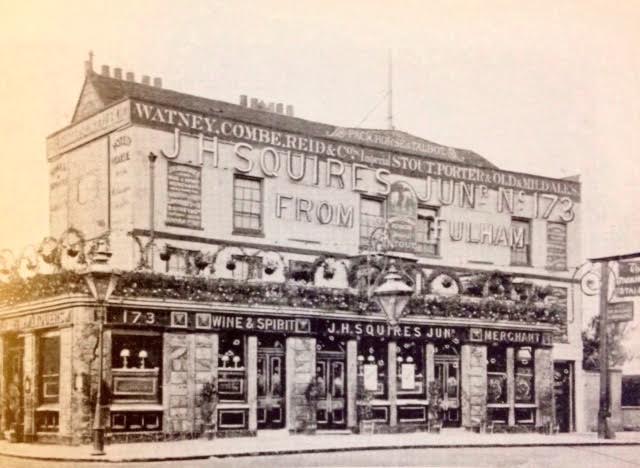 The Packhorse and Talbot can boast some infamous guests. In 1698 George Barclay hatched a plot to assassinate King William 111 and with help from 40 conspirators, who hid in the cellars of the pub, planned to way lay the King’s coach as he returned to Kensington, via Chiswick from his weekly hunting expedition to Richmond Park.

The spot Barclay selected was Turnham Green Lane (now Wellesley Road), which was apparently a ‘quagmire’ through which the Royal coach had to be tugged along at walking pace. However, someone informed the authorities and the King put off his trip. Most of the conspirators were caught although Barclay escaped abroad.

Another notable visitor was Jonathan Wild, perhaps the most famous criminal of London during the 18th century who, while on trial, called as one of his witnesses the “Hays of the Packhorse” Turnham Green.

Wild invented a scheme which allowed him to run one of the most successful gangs of thieves and highwaymen of the era, while all the time appearing to be the nation’s leading policemen.

The Brentford Turnpike Trust also used the Packhorse and Talbot as its first meeting place between 1764 and 1776. The Trust was founded in 1717 and its purpose was to maintain the road between Kensington and Hounslow.

The name “Chiswick” means “Cheese Farm” and originates from the riverside meadows and farms that are thought to have supported an annual cheese fair on Duke Meadow up until the 18th century.

Chiswick grew up as a fishing village around St. Nicholas Church. The current church was built in the 15th Century but a church has been on this site since 1181 and for centuries fishermen and watermen have used the water front of old Chiswick to deliver goods to riverside businesses and into the City of London.’ 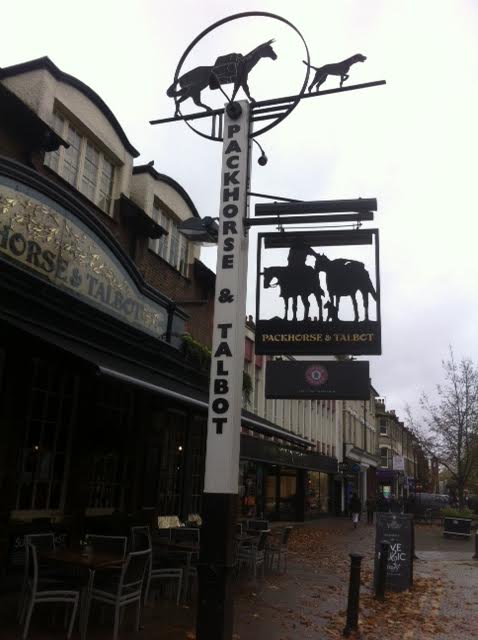 Apparently in 1800 when King George 111 was travelling across Turnham Green en route to Windsor, his carriage nearly overturned and his postilion was injured so he was taken to the pub and put in bed to recover!

Horace Walpole, the son of the first British Prime Minister, Sir Robert Walpole, used to feed his horses at the coaching Inn, when travelling between London and his home in Twickenham.

The Litchfield Mercury reported on 31st January 1913 that ‘All the old landmarks are going – or being restored. Right away down the Hammersmith Road stands the old Packhorse and Talbot, an old coaching house of our forefathers. It is being rebuilt, renovated and “improved”.

But its main interest lies in the fact that it was for years the headquarters of the now famous Harlequins Football Club, which thirty odd years ago was a very small affair. But they “dressed” at the Packhorse and Talbot and played their matches against the hospitals and other quite obscure clubs – over the way at Turnham Green, which soon became Bedford Park.’

CAMRA’s 2005 West London Pub Guide described it as: ‘Large, plush and comfortable lounge bar refurbished in 2002. Well lit with two full-size pool tables at the back. The front beer garden makes it good for warm weather drinking and part of the pub can be hired for functions…’

Bill’s choice of ale was Greene King’s ‘London Glory’, but unfortunately for me I had to be content with orange juice due to the antibiotics!