There have been a number of periodicals issued by the Club/Supporters Club since the 1940’s. The first one I featured in this series was ‘The Superhoop’ from the 1970’s, which was followed by the ‘Bush Ranger’ and ‘The News-Letter’ respectively.

Life expectancy was usually just a few years and it’s doubtful whether ‘The QPR Advertiser’ lasted for more than a season.

‘The QPR Advertiser’ was launched on 26th August 1978 to coincide with the second home game of the season. The outrageous headline read: ‘Harkouk: As Big A Star Turn As Stan?’

It covered the two-week period up to 8th September and was to be: ‘Distributed at all First Division Games of Queens Park Rangers Football Club at Shepherds Bush London W12.’ 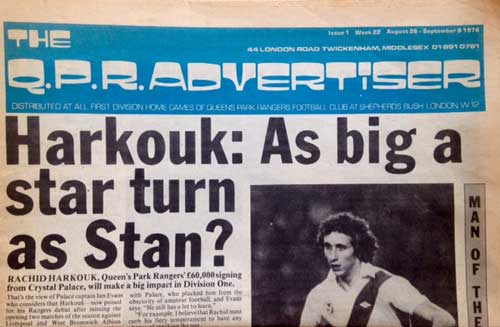 Apart from the article on Rachid Harkouk there was a welcoming message from Chairman Jim Gregory: ‘This week sees the first issue of the Queens Park Rangers Advertiser. This paper is being given away completely free of charge and will be available at almost every home game throughout the season.

I understand that it will be informative, controversial and entertaining. I hope that both our supporters and our visitors will find it interesting and useful and I wish the publishers every success with this venture,’

The goalkeeping article on page two was written by the Liverpool captain Emlyn Hughes who stated that: ‘Clemence is the best’ – however on the following page Peter Bonetti suggested: ‘But don’t discount Parkesie’

Also on page 3 is a very saucy ‘QPR Corker’ – Helena Raklen. Aged 20 and from Stockholm, she is described as ‘one of QPR’s regular supporters, as she goes to almost every home match with her student boyfriend Peter’. Gerry Francis was named as her favourite player.

Completing the page is a Jason Tomas interview with Terry Yorath and Trevor Cherry regarding the standard of English football and the lessons to be learned from the World Cup in Argentina.

Next up are two short articles on the day’s opponents Nottingham Forest – with an assessment by Ian Gillard and Glen Roeder’s overview of Tony Woodcock.

On page 7 there is a half-page article by Frank Sibley on why he had quit as manager.

And finally on the following page, Gerry Francis and Tommy Cunningham reveal that they are both pigeon fanciers.

The last four pages are filled with adverts for jobs. In fact of the twelve pages – six of them are completely condensed with advertising.

I also have the 2nd edition, which is dated 9th September and the headline reads: ‘What’s Wrong With QPR?’ Steve Burtenshaw is then quoted as saying: “We’re a reasonably good team when we have the ball, but not when we haven’t.”

If anyone knows how many more of these were issued, then please get in touch.