It’s rare that I come away from a game without taking at least something from itbut this was not one of them!

Both the goals we conceded were not due to Burnley producing some great piece of team play, but by ‘seasoned’ pros who cannot defend. They managed to make Arfield and Ings look like world-beaters. Ings is good but he’s no Lionel Messi.

No doubt we had our moments, but when you looked around the pitch I failed to find any positives. An aging side with too many players past their sell-by date, some of whom need to take responsibility, instead of looking at others.

Our leader, a prime exampleJoey Barton, was shocking. I’ve seen milk turn quicker! He could win awards for his gesticulating, after yet another pass went astray.

To be fair, no one came out very well, try as they might, least of all the management. We played with no width, no confidence and moreover no tempo. Without tempo, we are sooo predictable – again Barton was the worst culprit.

A lot has been said about the angry fans at the end of the game, I think that they have every right to let the players know how they feel, but without going over the top.

There was a very funny moment though after the ball was kicked out of play into the disabled area, a punter jumped out of his chair and kicked it back.classic!!!

Harry has thrown the dice once too often, he’s tried everything but it just isn’t working. Thank you Harry but its time to move over. We need new impetus, new ideas and a new belief. We have a ready-made team of Hoddle and Les at the clubwhat to lose?

All that said, enjoyed the trip with Steve and the boy Tenner. And it’s always good to meet Finney, Steve Sayce, Bernard (Kerrins) and otherstill the next time. 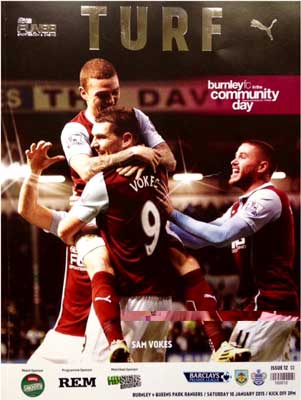 The sight of the Queen’s Park Rangers team sheet before kick-off at Turf Moor summed up Harry Redknapp’s desperation. His decision to start Adel Taarabt – a player not seen in a hooped shirt since October and with just 25 minutes of Premier League football this season before yesterday – had the feel of a last throw of the dice for a manager seeking a change of luck.

But the gamble did not pay off. In failing to defeat Burnley, Rangers became the first top-flight side since Sunderland in 1964-65 to lose their first 10 away games. It is a miserable record and leaves them back in the bottom three, with Burnley leap-frogging them to 17th place.

It was all too much for some of their supporters in the Cricket End Stand who had a heated exchange with some players at the end.

The reason for this dire run was not hard to find. Before Saturday Burnley had not scored more than a single goal in a home league game this term; so poor was Rangers’ defending, though, that only some fine saves by Rob Green limited Burnley to their two first-half goals.

The foremost virtue of a Burnley side now unbeaten in four matches is their pressing and tireless work rate. Manager Sean Dyche hailed the quality of Arfield’s 13th minute opening strike – a weaving run between Barton, Mauricio Isla and Dunne before the winger curled a shot inside the far corner.

Redknapp was less generous – “We had three men around their guy and we are not talking about Lionel Messi,” he moaned – and he was even more annoyed about Burnley’s second goal.

Steven Caulker responded too slowly to Ashley Barnes’ ball into the box. Letting the excellent Ings in to nick the ball away and sidestep both centre-backs before poking a low finish under Green. “We were right in the game but we gave a horrendous goal away,” Redknapp said.

In between, Burnley old boy Charlie Austin struck his 13th goal of the campaign to bring Rangers level. He had already turned a Mauricio Isla cutback against a post when, in the 33rd minute, Dean Marney tripped him in the box and he rifled his penalty past Tom Heaton.

That was as good as it got, though, and Burnley should have added further goals in the second-half. Green saved well from Barnes and Michael Keane, while Barnes had a goal ruled out for a nudge on the goalkeeper.

“It is hard to win away the way we are – seven or eight of that team here today were playing last year in the Championship and finished miles behind Burnley” said Redknapp, who is looking up at the Clarets once more.

I’m not surprised that we lost again on the road because:

1 – The only Burnley player to wear gloves was Heaton in goal. We had 6/7 players wearing themman-up and show the opposition that we are up for it!!!

2 – Same old problem of no pace and no wingers to give the type of service that Charlie needs.

3 – Fer looks great on the ball in deep areas but offers no threat going forward and never puts in a tackle – and wears gloves as well!

4 – We can’t defend in wide areas, stop crosses and it seems to be a lack of communication from Green all the way through the side – no one is taking responsibility.

5 – Clint is a legend but is past his best and Saturday he spent more time in the first-half playing up to the Burnley crowd – great character but is not a Premier player anymore.

6 – Joey giving the ball away especially in the second-half has given a negative view to his performance. I thought he was the only one in the middle of the park who grafted, won the ball back and when Henry went off, Joey was on his own because Fer, in his gloves, couldn’t tackle his own shadow.

7 – In regards to the management it was normal service resumed. No passion, no motivation, a lack of tactical nous and when Harry took Vargas off for Bobby Zamora he threw the towel in.

8 – Bobby had his minute of limelight last May. Harry, Bobby is not up to the Premiership – lumping the ball to a statue is sooo 1970’s and if we go down lets go down by playing it on the floor – we have the players to do it!

9 – On a positive note, Adel did well, but the 90-minute cameo was just putting him in the shop window – cheerio Mr T.

10 – Dyche and his players will give their all from now on to the end of the season. They have a definite way of playing and with pace upfront will always threaten.

But despite all that they will go down and as for us more of the same will see us join them unless the Board move Harry out and put Hoddle and Les in charge. Do that, and we will see more motivation from the dugout and a tactical approach that will change games, win games and give us a chance of staying up.

The Club provided free travel by way of four coaches for the trip to Turf Moor. Jimmy collected Chris and myself from the Target and we arrived in good time to park up in the local Cricket Club.

After meeting up with Kerrins, Steve Sayce and others in the clubhouse, word went round that Adel Taarabt was in the starting line-up.

Rob Green made a couple of good saves, Charlie Austin converted a penalty and hit the woodwork, but poor defending handed the home side their two goals.

Adel Taarabt started off a bit rusty but he got better as the game went on which included a wonderful cross-field pass. Whilst Steven Caulker had continued to argue a decision with the linesman, the opposition were sweeping into our half!

With 15 minutes or so remaining, Mauro Zarate made his debut and Harry Redknapp also brought on Armand Traore who was booked within 40 seconds of his arrival.

As we headed back down the motorway neither; Jimmy, Chris or myself were able to draw any real positives from Harry Redknapp’s latest throw of the dice!

Thanks to Jimmy for the lift.