SR: Jeff, I work with a chap who used to be at the BBC years ago and he told me that he remembers you as a ‘warm-up’ comic there. He then bumped into you again a few years ago on a holiday cruise and you spoke about the Rangers. Is there any family connection with the R’s ?

Jeff: Hi Steve, it’s always a pleasure to talk about Rangers, so thanks for asking me. I still work as a warm up comic at the BBC and you can guarantee that at least three or four of the chaps who work on the shows are Rangers supporters. In fact, I can remember a couple of the guys disappearing on a week night and popping round to Loftus Road just to watch half hour of the game.during the show !!!! We used to phone the ground during games for an update as well. As for a family connection, my dad was and still is a Rangers fan and it’s down to him that I have been a Rangers supporter for over 40 years.

SR: When did you start going to Loftus Road and do you still manage to get down there very much ?
Jeff: I was born in Hammersmith Hospital and we lived in a flat in Bulwer Street, just off Shepherds Bush Green, moved to Perivale where my parents still live. My dad would take me to the games when I was 3 years of age. We used to stand up the School End where the back of the Stand was slanted if I remember right and open to the elements. If I was a bit restless he would take me home and leave me with my mum at half time and still be back in time for the second half. Yes I still go as often as I can but with the way my career has been the last few years what with the cruises and more travelling I don’t get to the games as often as I would like to. A few years ago when we were in the Premiership and got relegated, I had a season ticket in the South Africa Road Stand. I had a lovely seat and it was great as I sat with a great bunch of supporters. Now, I tend to sit in the Paddock as my 8 year old son Harvey loves to be near the pitch.

SR: Who would be your favourite all-time players ?

Jeff: For any supporters my age, it would have to be Rodney and Stanley. I personally think Rodney Marsh was the best player we ever had followed closely by Stan Bowles. I remember as a kid standing in the South Africa Road terrace watching Stan score some unbelievable goals. One of the goals I remember is now shown before the games on the new video screen. I also think we had some great players come to us in the final years of their careers.like Frank McLintock, Ray Wilkins and Terry Venables. Note that I am not including Mark Hateley.how did we ever sign that donkey ? Oh yes..I have a soft spot for Sir Les Ferdinand.

SR: Following the R’s over the years has always been a roller-coaster ride. What are your favourite memories ?

Jeff: I always remember we played Chelsea in the 70’s in a FA Cup replay. It was a midweek game that had to be played in the daylight as there were the power cuts and the three day week. I was a pupil at Faraday School in East Acton. A few of us bunked off from school to go to Rangers. We were standing in the corner by the School End and the Paddock. Who was standing behind us? Our teacherhe said ” I won’t tell anyone if you don’t !” I don’t remember much about the League Cup Final in 1967 but I have seen the video enough times to know it was probably our finest hour. I can remember when we got promoted from the 2nd Division with IpswichI think and I can remember the excitement when teams like Tottenham, Arsenal and Man U came to Loftus Road. Watching the Manchester United game on New Year’s day when we beat them was a great memory. I watched the game in Bernard Cribbins dressing room, we also kept the audience updated of the scoreoh yes we did!! Also, I listened to the Sheffield Wednesday game on my laptop, mid Atlantic on the QM2. I found it really emotional as I felt a million miles away from where I wanted to be.

SR: You commented on the Indy R’s Site after the tribute to the late, great Jim Langley. He really was a great character and a gentleman wasn’t he.

Jeff: He certainly was, if only there were more like Jim Langley around now.

SR: There used to be a lot of comedians at Rangers. I remember the South Africa Road Terrace having its fair share of characters and comedians by the half-way line in the 60’s. Can you recall any funny moments. 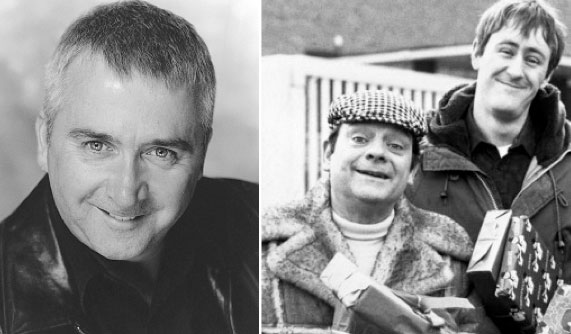 Jeff: Not that funny, I can remember the bloke with the drum and I can remember Charlton’s goal keeper, Charlie Wright coming down to Loftus Road and he would tell jokes and laugh with the supporters behind the goal. One funny moment I remember was when we were on a really bad run. I shouted out to Lee Harper as he came off at half time “Sort yourself out Lee”he looked up and told me to go forth and multiply much to the amusement of my mates.

SR: I see that you’ve been on tour with the Shadows, did you get to speak to Bruce Welch about the R’s ?

Jeff: Yes and I also bumped into Bruce a few times when he used to sit in the South Africa Road Stand.

SR: Apart from Bruce, have you come across any R’s fans in the business.
Jeff: Yes, there are a few musicians mostly in the SA Road Stand. John Huckridge is a very well known session musician and I used to see him at the games. There is also a panto producer John Spillers who I see at the games. Of course there is also radio presenter Robert Elms who is a big QPR supporter. I have had brief chat with Robert a few times but just about the R’s..that’s what’s great about football we all have something in commonespecially us Rangers supporters. Oh yes, the comedy actor Tony Selby is a R’s fan. It’s been a while since I have seen him at Loftus Road.

SR: You’ve also toured with Tom Jones and done Summer Seasons in Blackpool and Great Yarmouth with comics such as Russ Abbot and Freddie Starr. That must of been eventful !

Jeff: I toured with Tom and didn’t even meet him, that’s show business! Russ Abbott was a gentlemen and a pleasure to work with. My four years with Freddie was eventful but I am alright now !!!

SR: At the age of 14 you appeared in the Film Musical, ‘Bugsy Malone’…how did that come about and how did you start off in the business.
Jeff: I left Faraday school in 1974 and went to the Barbara Speake Stage School in East Acton. We all auditioned for Bugsy and I was lucky enough to make Alan Parker laugh at the audition. I wanted to be a comedian since I was a kid going to Butlins. I left stage school and started working as a comic and actor and have never done a proper days work since. I am very lucky.

SR: Directed and written by Alan Parker of course, it was regarded as innovative and certainly a brave film to make at the time. Jodie Foster and Scott Baio must of been around the same age as you. What do you remember about them ?

Jeff: Alan was a great guy to work for, a decent, normal, down to earth guy. Jodie was nice to work with but we had never heard of her so it didn’t mean that much to us British kids in the film. Scott was a pleasure to work with.we were all kids, it was like a summer camp.

SR: I bet firing those custard pies from splurge guns got a bit out of hand at times !!!

Jeff: They didn’t get the mixture right and for the first few days we were all suffering with sore eyes. The finale scene in the Speakeasy was a mad day.

SR: I remember seeing you appearing as the comic at Rodney’s Stag-Do in ‘Only Fools and Horses’. You must of enjoyed doing that. Did you appear in any other episodes ?

Jeff: I loved working on ‘Fools’, I was also one of the regular warm up comics on the show so I got to know the entire cast. I played PC Parker in the Christmas day special ‘To Hull and Back’. The show is a classic and the cast was the friendliest cast you could ever wish to work with. Can’t not mention John Sullivan, what a great writer.

SR: I didn’t catch it but you did 30 minutes of stand-up for Sky TV’s ‘Stand and Delivery’ at Jongleurs Comedy Club. How did that go ?

Jeff: It was a nice show for me to do as it was at a time when I was not getting any telly work. It did turn things round for me for a while.

SR: Jeff, You’ve also been to places like the Falklands and Bosnia entertaining British troops. Any interesting experiences performing overseas ?

Jeff: Every trip to entertain the troops is a humbling experience. We don’t realise how brave our troops are. I did a tour in Belfast during the troubles with this young comic who used to stand there sweating his cobblers off talking to soldiers who didn’t have a clue what he was talking about. I wonder what ever happened to Lee Evans !!!!

SR: Do you write your own material and do you give the R’s a mention from time to time ?

Jeff: Yes I write my own material now more than I did years ago when it was fashionable or some would call it lazy just to tell jokes. Yes I also mention the R’s but we don’t get the laughs we used to get before the money boys came in.

SR: I’m a big fan of Arthur Haynes who happened to be from Hammersmith and also a Rangers fan. Do you have any comedy heroes or are there any that have influenced you ?

Jeff: Arthur Haynes ???? How bloody old do you think I am ? My comedy heroes are Bob Monkhouse, Jimmy Tarbuck and an American comic called Alan King. My only comedy hero who played for the R’s is Ian Holloway. I thought he was very funny and a hero. It was a shame how it all ended up with the gardening leave fiasco.

SR: Many thanks for taking the time to do this interview for the Indy R’s. Good luck and best wishes for the future Jeff.

Jeff: It’s a pleasure Steve, let’s hope we can go on a run now and get in to the play-offs.

(Jeff can be contacted at: jeff@jeffstevenson.co.uk)

7 thoughts on “Interview With Jeff Stevenson aka Harvey Oliver.”