The Canaries arrived at Loftus Road on 6th March 1993 in third position of the Premier League, whilst the R’s were in seventh place and ahead of all the other London sides.

“Come on the Reserves!” shouted a fan towards the end of a game well won by Rangers. He could have been addressing either side but certainly Norwich suffered much more from the absence of their two-regular centre-backs than did Rangers, who missed half the team.

This was certainly no day for Norwich to improvise a central defence, faced as they were by a rampant Les Ferdinand. Culverhouse was a sweeper behind Sutton and the inexperienced Woodthorpe, but when Ferdinand cut loose there were always goals in the offing.

Ferdinand scored his first midway through the first-half. Crook, who until then had been playing skilfully in the Norwich midfield and had brought a spectacular save from Roberts when he drove in a right-footed free kick, foolishly obstructed Michael Meaker.

Wilson curled in a searching free kick from the left, McDonald met it on the far post, and Ferdinand nodded into the unguarded goal.

Meaker, getting his first outing of the season on the left-wing, was enjoying himself. Previously, when Sutton hesitated, he had driven a shot against Gunn’s body.

Towards the end of the first-half, he sent Ferdinand away on an irresistible run. Woodthorpe was left helpless as Ferdinand, with tremendous acceleration, flew by him on the outside, finally curling his shot around Gunn. 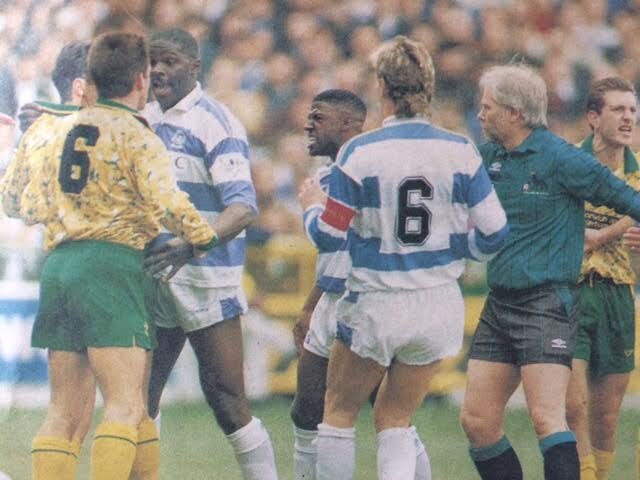 The game seemed to have slipped away from Norwich but just before the interval Rangers presented them with a goal.

The busy little Ruel Fox crossed from the left. Rufus Brevettfoolishly tried to bring the ball down and turn with it. It ran away from him and Mark Robins extended a foot to send it bobbling across the line.

You might say that the turning point came early in the second-half. Untypically, Alan McDonald completely missed the ball, letting Lee Power through alone. Power’s shot was a fiasco, high and wide of goal. Norwich would not come so close again.

Near the end, David Bardsley crossed for Ferdinand to head sweetly to Wilson, who duly scored.’

‘Les Ferdinand made Norwich pay a terrible price when he ended their title ambitions, and his goal drought, with such spectacular finesse at Loftus road.

The England international cost the Norwich players the chance of earning a £1 million bonus by effectively killing off their Championship challenge with two goals, one of exquisite distinction. And the England striker has a habit of impressing whenever England No.2 Lawrie McMenemy visits the West London club.

Manager Gerry Francis joked: “We’ve just given Lawrie a season ticket and when he can’t make it we’ll put an effigy in the stands.”

Ferdinand’s second goal – his 14th of the season – was the pick of the bunch. He ran 45 yards before firing home.

Mark Robins pulled one back for Norwich, but Clive Wilson made sure QPR got their just reward.’

Rangers went on to lose 0-1 at Anfield four days later.