QPR took on Rotherham United in a return friendly at Loftus Road on 13th December 1947. Two weeks earlier the R’s had been beaten 0-1 at Millmoor in front of 13,000 spectators.

‘This meeting of North and South promotion candidates provided a thrilling encounter at Loftus Road, and Rangers, decidedly in arrears at the break, only snatched victory by a second-half rally in which Hartburn netted two grand goals.

Newcomer Gibbons showed promise as leader of the attack and may have failed to score only by his eagerness to pass the ball when within shooting range.

Rangers failed to find their men with the clockwork precision of the Northerners and it was quite in keeping with the run of the play when McMahon (a Rangers favourite of yesteryear) raced through to give Rotherham the lead.

Whether due to vitamin pills, straight words in the dressing-down-room, or merely to the fact that their first-half display was too bad to continue, the Londoners showed a great improvement after the interval.

Daniels gave a pointer to the forwards when he struck the post – goalkeeper Street being practically in the next borough – and Hartburn raced through the Rotherham defence in the 63rd minute to equalise with a replica of McMahon’s goal.

Rangers took control of the game from this point and Ramscar sent Hartburn away to settle the issue with another brilliant goal 15 minutes from the end. 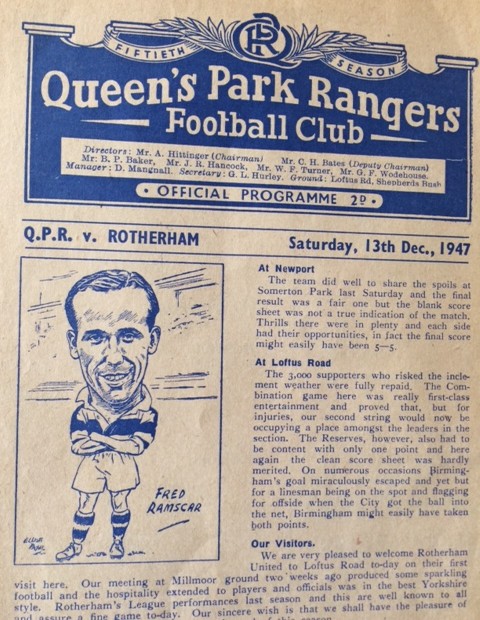 The Daily Mirror reported on the signing of John Gibbons: ‘While Seed was on his way to Scotland, Queen’s Park Rangers were yesterday signing a centre-forward who lives within shouting distance of the Charlton ground.

John Gibbons, 22, was noticed by Alf Ridyard when the Rangers’ scout went to view a full-back in the Bristol City-Dartford Cup replay. Gibbons scored twice for Dartford. This afternoon he plays for Rangers against Rotherham in a friendly match,’

He eventually made his league debut for the R’s against West Ham nearly twelve months later on 23rd October 1948.

John went on to make nine league appearance, and scored two goals, before being transferred to Ipswich Town in May 1949.

(Thanks to Colin Woodley for sending me the newspaper report/article. The programme is from my collection)