On this day in 1976, the R’s took on Leeds in their final game of an historic season. Ron Phillips’ ‘Bush Telegraph’ programme notes included the following:

‘In any normal season Rangers’ superb winning run from January to April would have ensured that the Football League Championship Trophy would come to this club for the first time in its history.

A single slip in the final week at Norwich, however, means that we must overcome the formidable opposition of Leeds United today and, if successful, must wait until Liverpool and Manchester United play their final games in the first week of May before the Championship outcome is clear. (So much for that Sunday newspaper columnist at the beginning of the season who quoted Rangers’ hopes of winning the Championship with pigs’ chances of flying!)

Nevertheless the bookmakers’ odds now move against us and, while Liverpool cannot relish their prospects at Molineux on May 4th when Wolves fight for First Division survival, we can ‘only’ celebrate today Rangers’ triumphant entry into European football.

But who will agree with us that, taking into consideration the ups and downs of our history, this season has witnessed the finest sustained effort in the eighty years of our existence?

The Rangers players of 1976 and their manager, Dave Sexton, will be remembered with gratitude for at least the next eighty years.

Let’s give them all a big “Thank You” as they leave the pitch today – irrespective of the result of this afternoon’s match and those others in the next fortnight!’

Ron goes on to pay tribute to R’s fans everywhere, the Loft Boys, Keith Friend and the Supporters Club members, Season Ticket holders and some of those working behind the scenes including; Chief Steward Peter Holness, Tony Ingham, Jeff Meeson and Sheila Marson. 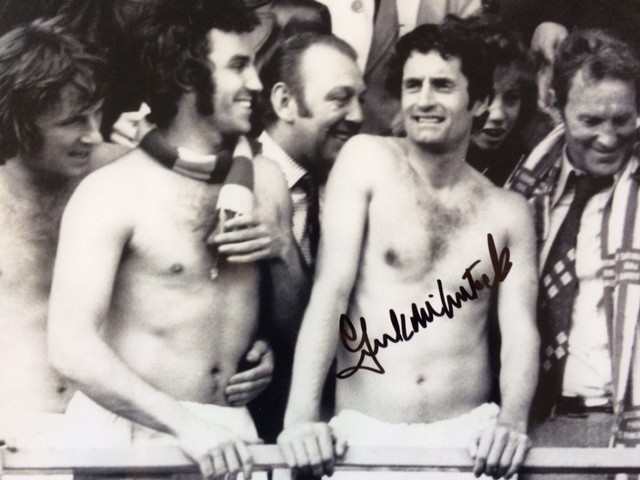 ‘Ten days of agonised waiting…that is Rangers’ lot now after this hair-raising victory over stubborn Leeds.

Tuesday May 4 – when Liverpool meet Wolves at Molineux – is the day the 1976 League Championship will be decided. Then, the Merseysiders, one point behind the West Londoners, but with slightly superior goal average, will need just one point to clinch the crown.

But should Liverpool draw 3-3 or more, Rangers will seize the title. It is, I fear, long odds against Liverpool losing next week. I agree with Leeds manager, Jimmy Armfield, when he described Bob Paisley’s thoroughbreds last night as “the hardest team to beat in the League.”

Yet, as long as there is even the slimmest chance – and Wolves, do not forget, will be fighting for their First Division lives – Rangers will sweat out those ten days of simmering suspense.

They will be hoping and praying that, somehow, the mighty Liverpool machine can be stopped from winning the championship for a record ninth time.

After all that, Rangers – the team with the educated feet and sophisticated approach – have given in skill and courage this season, after the way they have trail-blazed refreshing new patterns of creative play, no-one will grudge them their dream, however fragile, that the title can still land up at Shepherd’s Bush.

As their manager Dave Sexton – a man who believes passionately in quality football – said: “It has been a fantastic run-in – 27 points out of the last 30. That is a wonderful effort.”

At the end of this tight but thrilling struggle, thousands from the 31,002 crowd massed in front of the grandstand calling for Sexton and his stars.

On such an emotional afternoon when nerve-ends understandably, often jangled like fire alarms, it took Rangers 62 palpitating minutes before they could pierce the packed Leeds defence, cannily marshalled by Billy Bremner.

The were – rightly – refused a first-half penalty when Stan Bowles fell theatrically, and there was a humorous moment when Norman Hunter “lost” his shorts after Bowles accidently ripped them at the seam.

Then with storming Gerry Francis, a lion of a captain, and left-back Ian Gillard turning in his best performance of the year, Rangers at last grabbed the goal, which calmed their anxieties.

Fittingly, it was the 36-year-old Frank McLintock’s cross, flick-headed on by Don Givens, which enabled that bravest of wingers, Dave Thomas, to nod home a hurtling header amidst a triumphant roar.

Then in the 82nd minute, Leeds’ fine ‘keeper, David Harvey, was utterly deceived by one of the finest pieces of solo wizardry he will encounter for a long time.

Once again it was the cool McLintock who set up the move with a superb through ball out to Bowles, who had been cleverly posted on the right-wing after the interval.

As the rip-roaring Francis steamed up in support, imperiously signalling for the ball, Bowles cut past Hunter as if he were a ghost, but instead of passing, saucily curled a low left-foot shot round the frantically diving Harvey into the corner of the net.’

The tension evaporated following Stan’s superb goal and at the final whistle we swarmed onto the pitch to wildly celebrate in the moment. Eventually Dave Sexton and the players began to appear in the Director’s box.

Some R’s fans travelled to Molineux ten days later, I listened nervously to the match on the radio, whilst the Rangers players followed the events at the BBC Studios.

Wolves gave us some real hope when they took the lead, but our dreams began to fade with around 15 minutes remaining as Liverpool scored the first of their three goals!