Released in the UK on 7th October 1971, ‘Bedknobs & Broomsticks’ is a Walt Disney production set during WW2 and involves three kids who are evacuated from London.

Charlie, Carrie and Paul Rawlins end up at the home of a witch, Miss Eglantine Price, who is played by Angela Lansbury. She eventually tells them that she is learning her spells through a correspondence school, which has since closed.

There is still one final spell for her to learn, so they decide to travel on a magical bed in search of her tutor, Professor Emilis Browne, who is played by David Tomlinson.

Surprised that the spells actually do work, he tells her that the book had previously been ripped in half, so they decide to set off to the Portobello Road in search of the missing pages. 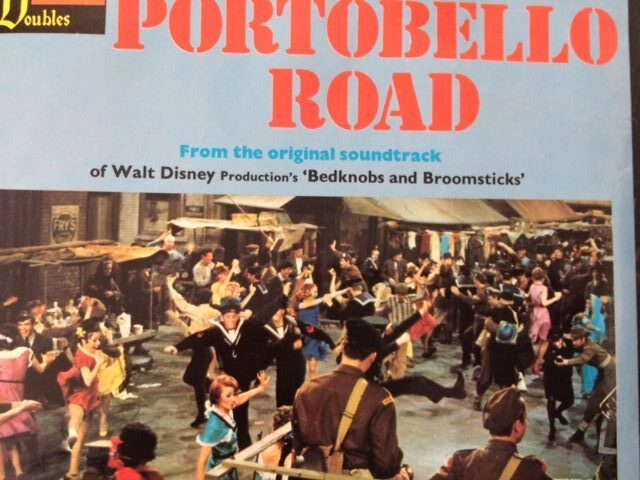 You’ll meet all your chums in the Portobello Road,

“First Burke’s Peerage”, “The Bride Book”, “The Fishmonger’s Guidebook”,
A Victorian novel, “The Unwanted Son”,
“The History of Potting”, “The Yearbook of Yachting”,
The leather-bound “Life of Attila the Hun”,

You can eat like a king here in the Portobello Road,

The song was written by the Sherman brothers, Richard M. & Robert B. and a single was released on the ‘Disneyland Doubles’ label. Catalogue number DD18 featured, ‘The Beautiful Briny’ with ‘Portobello Road’ on the flip side.

Apart from a few additional scenes in Dorset, the film was shot predominately at Disney’s Burbank Studios, in California.

It had mixed reviews at the time, but the superb live-action, special effects, choreography, animated sequences and songs, still make it very watchable and is now considered to be a family classic.

One thought on “The Sounds of West London: No.1 – Portobello Road, W11”