When Barry Thompkins put up a photo of his Great-Grandfather recently on the: ‘You’re Probably from W12 if…’ Facebook group page, I just had to contact him.

A moment captured in time, from the late 1920’s in fact. Barry added that it showed his Great-Grandfather walking down the Uxbridge Road en route to Loftus Road to see the R’s.

Not only did I ask Barry for permission to use the image,but I also wanted to know more about Tommy. It had immediately resonated with me and made me think of my Great-Grandfather, who had grown up in Notting Hill and the Bush. 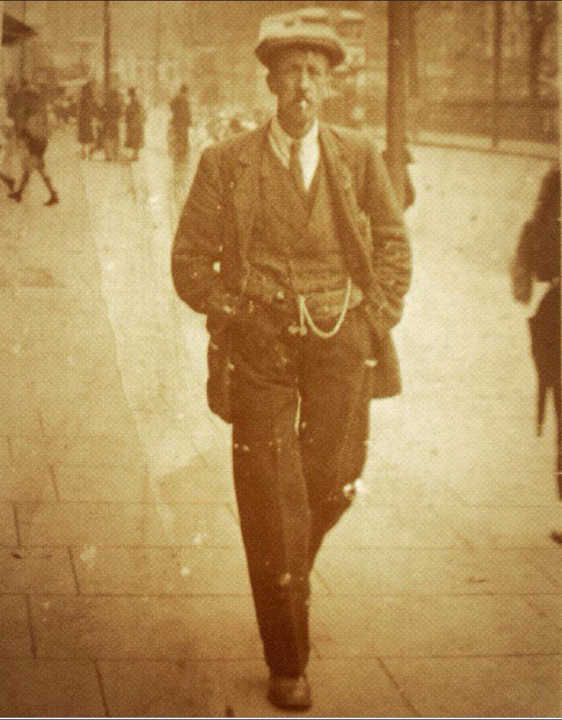 Barry’s Great-Grandfather was Thomas Charles Henry Matthews. He was born in 1873, not in West London, but in Islington. And like my Grandad, he was sent to the Work House.

After leaving the Holloway Work House in the early 1890’s, he lived around Newington Green in his teenage years and started work as a railway platelayer.

Tommy married Alice Marlborough in Islington in 1897 after meeting her whilst on one of his fishing trips to the South Mimms area. Her family were from Droop Street and Tommy was soon to become a Rangers fan.

Following the birth of their first child, Mabel in 1899, the family moved to 1, Johnson Street (now Hillgate Street)in Notting Hill. The area was full of QPR fans and between the Wars the family went on to intermix with other local families who were predominately Rangers supporters.

Tommy had joined the Army Service Corps on 12th April 1915 after previously serving for five years in the  17th Middlesex and the Middlesex Militia prior to that. 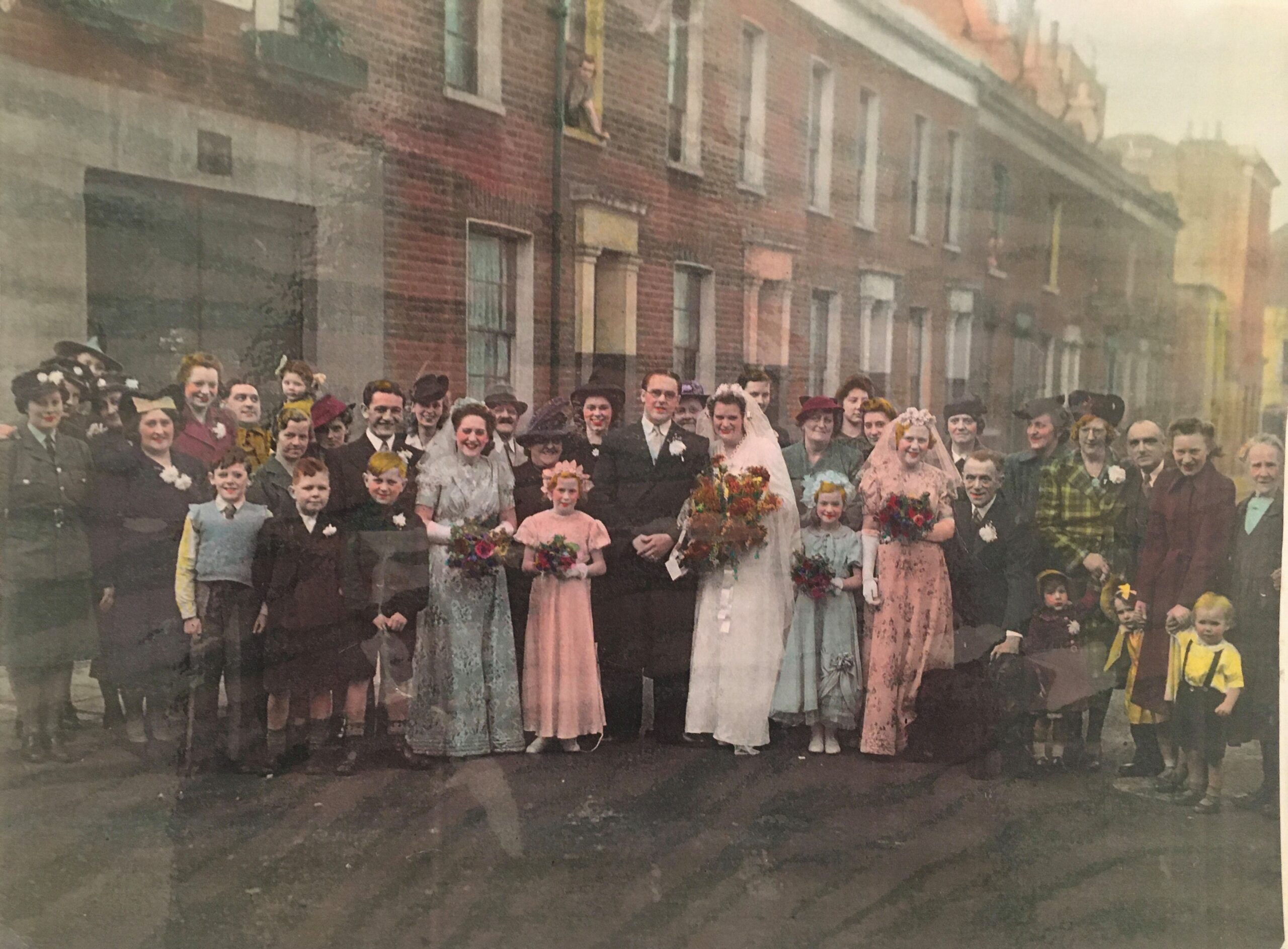 After his War service, Tommy moved from HillgateStreet to his daughter’s, Lil, at 55, Hunt Street, which is at the southern end of Latimer Road. He worked for a while in the coal yards.

Tommy used to take the No.12 bus home and it was sweets for the kids if the Rangers had won. He spent his latter years doing a bit of painting and decorating.

The family stayed in Notting Hill until the mid-sixties, but new generations moved onto Latimer Road and Shepherd’s Bush. One Grand-Daughter lived for over 70 years in Droop Street.

Tommy fell ill with prostrate problems in his 64th year. After being given the last rites, the following day he went missing from his death bed in Hammersmith Hospital to attend a Rangers home game for what was to be the very last time.

Rangers beat Southend United 7-2 that day and after the match in November 1936, he slipped back to the hospital and sadly died that night!

His family continued supporting the R’s and they used to gather at the White City on the Olympic Bar steps,before standing together on the South Africa Road half-way line, around three-quarters of the way up.

Barry’s Uncle Tom lived in his father’s house at 26,Droop Street for all of his 92 years and used to take him cuttings from the Kilburn Times every other week for his QPR scrapbooks. 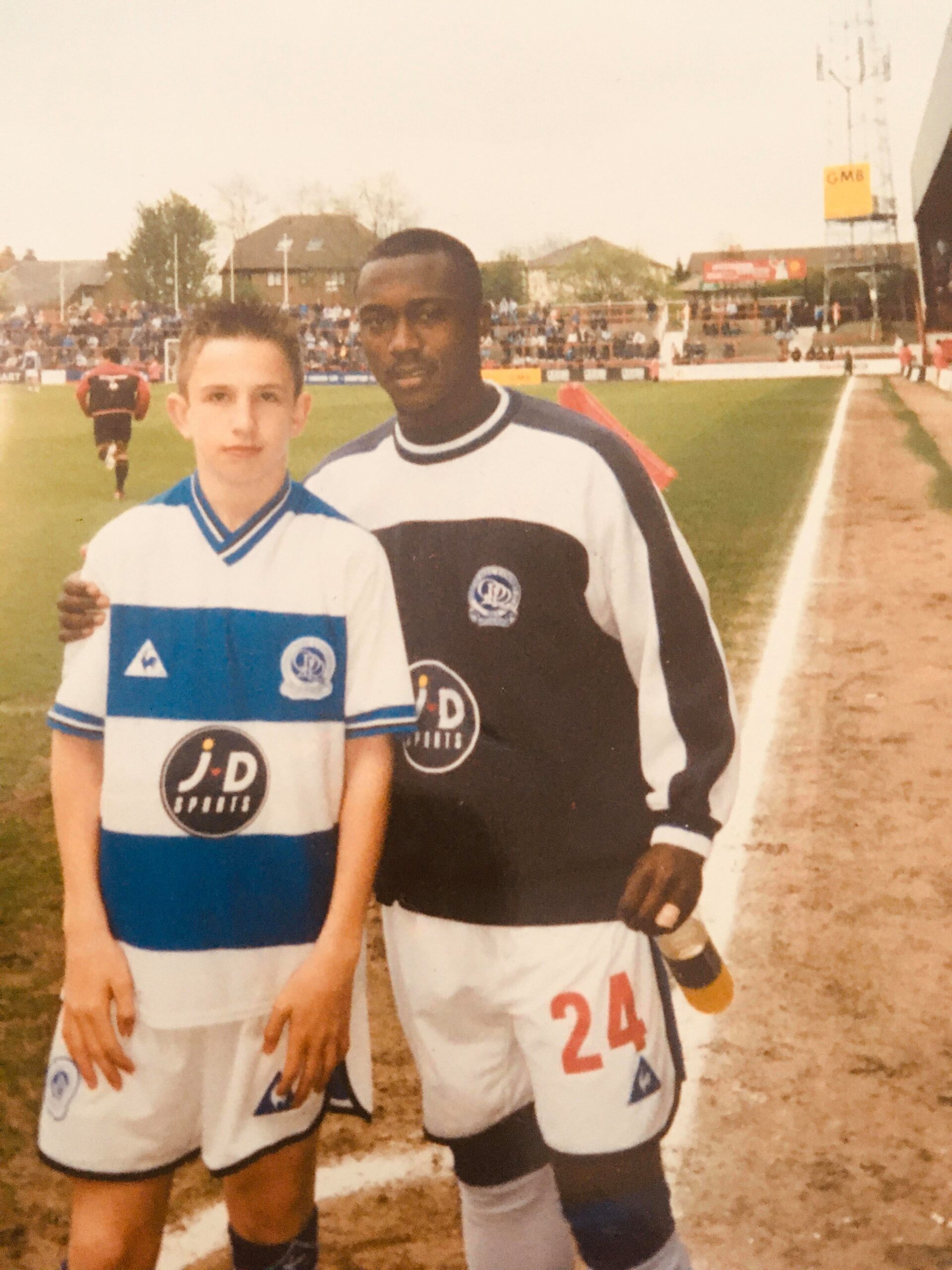 As for Barry, he was born in Tommy’s daughter’s house, Arminger Road, Shepherd’s Bush.

Tommy’s legacy has entered its sixth generation. The family are now stretched worldwide, but retain that blue and white blood flowing through their veins.

(Featured below Tommy’s photo is the family’s wartime gathering in Farm Place, W8, after his Grand-Daughter Beatrice’s wedding to Harry Green. Bottom pic shows Barry’s son, who was the mascot at Griffin Park in April 2003)