The following article appeared in the Hammersmith & Shepherd’s Bush Gazette on 11th April 1968:

‘Home matches are recognised throughout sport to be beneficial to the host club, where they are considered to have a better chance of coming out on top.

Queen’s Park Rangers have shown how much “home” means to them by their decision this week to build a £150,000 stand at Loftus Road during the close season.

Speculation was laid to rest this week as to where Rangers would be playing their home matches next term, when the board announced that negotiations with White City had broken down and the decision had been made to stay at Loftus Road.

With the prospect of First Division football and the bigger gates it will bring, Rangers’ ground, with a capacity of 25,000, would be a millstone around their necks, not enabling them to cash in on their success with an increase in gate money.

But the new plans just announced will add in the region of 10,000 to the capacity and could make all the difference between success and failure in the high financial sphere that is top grade football.

The new stand will be built on the South Africa Road side of the ground opposite the present stand, and with seating above and terracing below, should enhance even more the atmosphere at Loftus Road, which is as good as at any ground in the country.

The seating capacity is expected to be 4,000 in the new stand, which will make seating at Rangers for 7,000 spectators, but Ron Phillips, the club secretary, says that despite this additional room, Loftus Road will be the hardest ground to get into in London if Rangers make the First Division.

The stand will have to be completed between May 4 when Rangers play their last home game of this season, and August 10 when they hope to be playing their first game in Division One.

Already Rangers have had over 1,800 applications for season tickets and on Saturday spectators going into the stands were given an application form for a season ticket for next season.

“The demand for seating is considerable,” said Mr Phillips. “Last year we had only 525 applications and the year before that a mere 76, but now we expect to be inundated with applicants.”

“Home is where the heart is” they say, and the heart of Rangers and their supporters is definitely Loftus Road, where next season could see them writing yet another chapter in their fantastic success story so far.’ 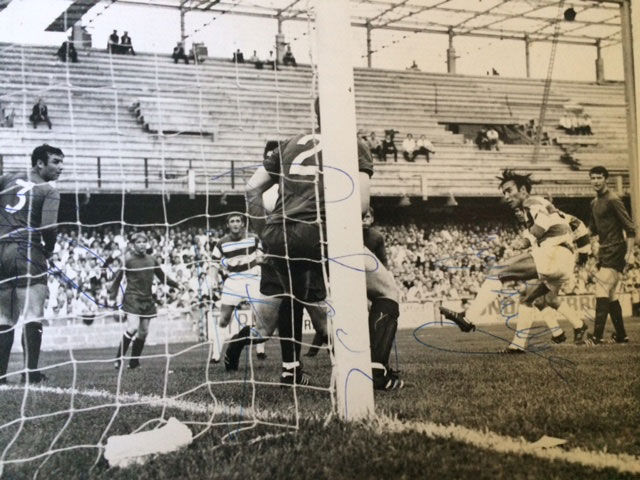 The new Stand was fully opened for the Southampton game on 28th September, 20,765 attended the match, which finished 1-1.

In the following home programme the Bush Telegraph reported that: ‘Our builders are particularly pleased with it as it is perfectly situated in relation to the pitch and nearly all seats give an uninterrupted view of the entire playing area.

And if a spectator exists who becomes bored with what’s happening on the pitch – well, from the back of the stand he can see mile upon mile over the roof-tops to the other side of London!’

(The above pic is from my collection & shows Barry Bridges’ goal against Manchester City on the 24th August. Thanks to Colin Woodley for sending me the newspaper article)