Alec Stock had said the previous Saturday following the defeat at Grimsby: “The glass of beer didn’t taste so good afterwards…I didn’t feel like singing!”

‘League-leading Rangers, who were beaten 3-1 by promotion rivals Grimsby Town last Saturday, had new signing Colin Whitaker on the left-wing. To make way for Whitaker, Arthur Longbottom switched to inside-left in place of Mike Bottoms.

Rangers’ new boy Whitaker had a good chance to score with his first kick for his new club. Rangers forced a corner on the right-wing and Longbottom flicked the ball across to Whitaker, but Feasey and Davidson stepped in to block the winger’s pass.

Rangers looked the more dangerous side in the opening exchanges, but when City won a free kick just outside Rangers’ area, their defence looked none too sure. Davidson dropped a good lob into the goalmouth and the ball bobbed about uncertainly before it was scrambled away.

A back-pass by Feasey to Fisher gave the Tigers an anxious moment for the keeper failed to collect the ball cleanly and it rebounded out of the penalty area. Fisher had to dash out of the area to fly-kick the ball clear.

It was seven minutes before the Tigers got in their first shot, Price opening the way for a 30-yard drive by McMillan. The ball flew yards wide, however.

The Tigers were taking some time to settle down on the rather small Rangers’ pitch, but the League-leaders using varied long and short passes, were keeping up a steady stream of attacks.

They almost brought reward in the 12th minute when, from their sixth corner, Evans headed in and Davidson had to clear off the line with Fisher having gone out to cut off the ball and missed it.

It was not until the 22nd minute that the Tigers forced their first corner, but they were gradually coming into the game more and in the 24th minute they took a surprise lead.

A City attack petered out midway in Rangers’ half and, with no one challenging him, Angell decided to pass back. The ball went straight to King, the Tigers’ right-winger, however, and Drinkwater had no chance as he picked his spot with no one near enough to challenge him.

The goal put new heart in the Tigers and robbed Rangers of some of their previous poise, the City attacks were beginning to look more threatening and Drinkwater had to scuttle across-goal to save a dangerous lob by Price.

Rangers were not taking charge of the game as one might have expected from a top-of-the-table side, and they had another anxious moment when Chilton raced down the right-wing on to a pass by Price, beat Rutter and then forced the ball past Drinkwater as the keeper came out. QPR’s defence covered up quickly, though, and were forced to concede a corner.

Rangers were getting a little desperate in their approach play, but, even so, Fisher had to dart out and punch away crosses four times in quick succession.

For a spell before half-time, play was confined largely to midfield, with Rangers having the slightly better of it as they began an all-out bid to snatch an equaliser before the interval.

A minute before the break, Rangers got the equaliser they were striving for. Fisher made a fine one-handed save from a right-wing cross, turning the ball away for a corner – QPR’s ninth of the first-half.

From the flag-kick, however, Keen got the equaliser. The ball floated into the middle and was then pushed out to Keen, who met the ball on the run to see it scraped into the net. Half-time: QPR 1, Hull City 1. 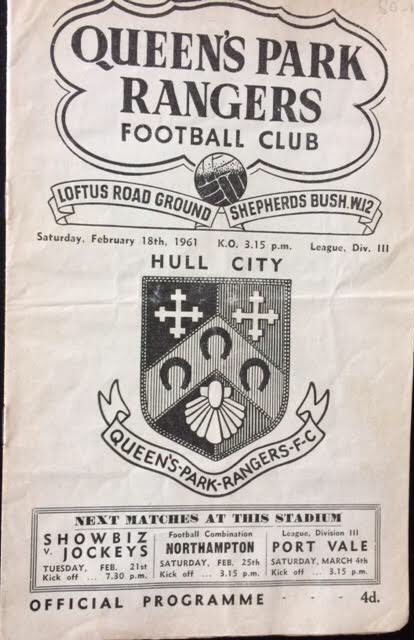 There was an early shock for Rangers in the second-half when Drinkwater dropped the ball as he was preparing to clear. Fortunately for him, however, the ball bounced right for him to turn and drop on as he was challenged.

Price and Chilton broke away down the right-wing with the inside-right cutting in along the goal-line. Just as he prepared to centre, he was bundled into touch and the ball flew too hard and too high for anyone to reach.

The Tigers were occasionally showing up flaws in Rangers’ defence and when King sent Crickmore down the middle, the left-winger hit a right-foot shot that beat Drinkwater and hit the post, rebounding into play. It was a great effort by the winger for he was policed by a defender all the way, but he still managed to get in his shot.

Not long afterwards, he had another drive saved by Drinkwater and then Collinson darted in quickly to let loose a drive, which also sent the keeper diving full length.

Rangers were throwing everything they had into the fight for another goal, but the Tigers were defending equally sternly and with plenty of spirit and determination. Davidson had to clear an Evans header off the line and Fisher made a fine save from a shot by Lazarus.

Towards the end of what was becoming a rugged, no-quarter-given-or-asked game, the referee called police to patrol a touchline after King had complained to him. Shortly after this incident Bedford scored for Rangers.

The ball shuffled about in the Tigers’ penalty area, and half-a-dozen players all had a thrash at it until, finally, Bedford poked it through the forest of legs and into the goal.’

That Brian Bedford winner was his 27th league goal of the season.

The R’s went to Tranmere the following week and won 2-1, with goals from Bernard Evans and Pat Woods (pen).