He was tough tackling, fearless, dynamic and took no prisoners. That’s the way I remember him from my early schooldays watching the Rangers play in that far off era of the late1950’s/early 60’s.

In a brief period just for a few fixtures, George was put in the centre-forward position in an attempt to add some punch to the attack, but alas the experiment proved to be a failure. Never a good plan if you ask me.

George never let the side down and wore the QPR shirt with pride. He always gave his all and no matter what the score-line was out on the pitch he never threw in the towel.

Following his departure from the R’s in 1960, George went on to play for Crystal Palace and in the 1970’s he subsequently managed Leyton Orient for a while.

To paraphrase a very recent quote from Scottish comedian/actor and TV personality, Billy Connolly: ”Bits of my childhood keep dropping off!” 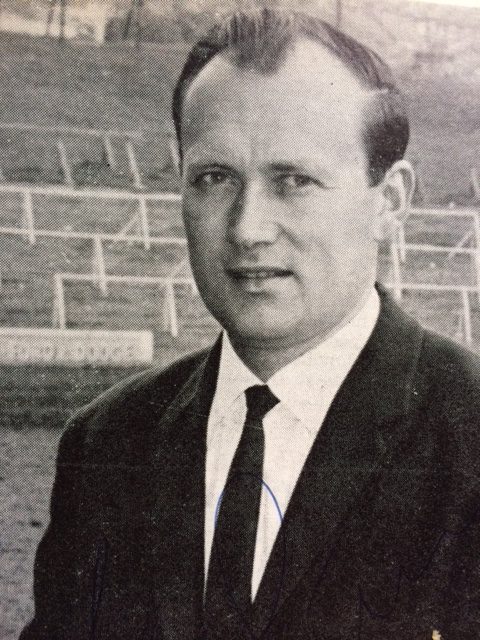 George made his league debut at Bristol City the following month on 22nd August and scored one of the goals in the 2-1 win.

The 1958 Sportsmen’s ‘Who’s Who’ book notes that George was living at South Down Road in Portslade, Sussex.

After making 278 League and Cup appearances for the R’s, George was transferred to Crystal Palace in June 1960.

He retired in 1965 and became a coach. George later managed Leyton Orient and Millwall.

For his Testimonial match in 1967, Palace played an International X1 who, according to the line-up in the programme, included the likes of; Jim Standen, Bobby Moore, Geoff Hurst, Colin Bell and Martin Peters.

The Palace chairman, A. J. Wait, wrote in his tribute that: ‘George has many happy memories of the enthusiasm of the Rangers supporters, whom he rates as a great bunch of people.’

3 thoughts on “In Memory of George Petchey”