The following article appeared in the local Gazette on 11th February 1964:

‘New high-powered floodlights are to be installed at Loftus Road before the start of next season. They will cost between about £13,000 and £15,000.

This news comes less than a week after 65-year-old glove manufacturer, Bert Baker, took over as chairman of QPR.

Mr Baker and is fellow directors have agreed the necessity for new floodlights – the present ones were installed ten years ago – and their decision to go ahead with the plan will be confirmed at tonight’s board meeting.

The new lights will be on a similar four pylons as the present ones, but each will have 24 light units in comparison to 15. And there will be provision for an extra 12 units in each pylon if extra power is later required.

New chairman Bert Baker has been on Rangers’ board for nearly 20 years and is a life-long supporter of the club. His predecessor, Mr George Wodehouse, a one-time amateur player with the club, succeeded his father as chairman soon after the last war.’ 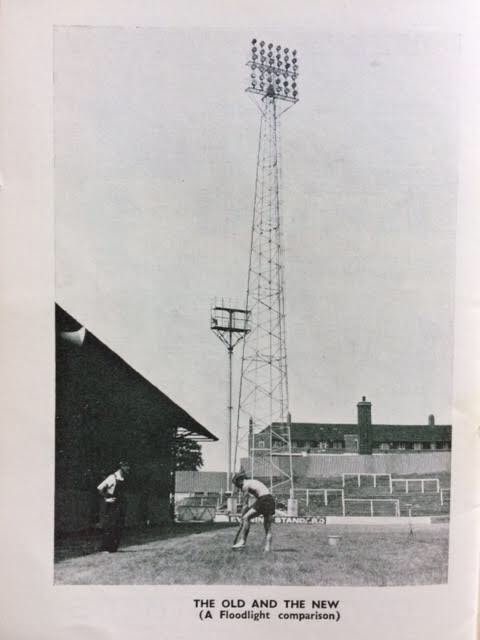 Previously on 5th October 1953, Arsenal sent practicallytheir full League side for the inaugural floodlight match at Loftus Road. Pat Kirkwood, the famous stage, screen and television star, kicked off to start the match.

QPR’s President, The Earl of Cottenham, wrote the following foreword in the souvenir programme:

‘With great pride I write the foreword for the first game to be played by floodlight on this ground. Truly an historic occasion because Queen’s Park Rangers are the first football club in West London to install floodlighting.

This honour is well merited because QPR staged the first floodlit match twenty years ago at the White City. I am proud too, because we have been honoured, for our inaugural match, by a visit of the Arsenal, surely the most sought-after fixture of clubs throughout the world.

Welcome, Arsenal, and thank you! May this epic match be the forerunner of many thrilling games under the lights at Shepherd’s Bush!

I am sure the great football public of West London and regions beyond will respond to the pioneer spirit shown by the Queen’s Park Rangers Football Club so enthusiastically backed by its Supporters’ Club. Such spirit deserves support not only in the evenings, but also each Saturday afternoon.

May the switching-on of the lights tonight signal the commencement of the brightest era in the history of Queen’s Park Rangers, one of the oldest professional clubs in the metropolis, so, switch on those lights!’

(Thanks to Colin Woodley for sending me the newspaper article. The above image was taken from the Club’s official handbook)

5 thoughts on “In 1964 QPR Announced that: ‘New Lights for Loftus Road will be installed next Season’”