The first person I bumped into en route was Micky Fitz at Waterloo Station. The walk from Norbiton Station took about 15 minutes.

The scene outside the stadium resembled a typical hot summer afternoon. The music was blaring out and the beer was flowing. Inside, R’s fans pretty much filled the John Green Stand.

With the home side on the attack, the water sprinklers suddenly came on and play was brought to an abrupt halt, much to the amusement of the crowd.

After 12 minutes, Matt Smith met a good cross from the left flank, but his header cleared the crossbar.

Minutes later a Don’s free kick was met by a powerful header, which flashed just past the post.

Joe McDonnell made a very good save, going down late from Eze’s opportunist effort and the ball went behind for a corner.

A Dons through ball to Joe Pigott caused two R’s defender to hesitate and Matt Ingram to advance short, but some quick thinking from Jake Bidwell averted the danger as he sped in to clear the ball. Half-time: 0-0. 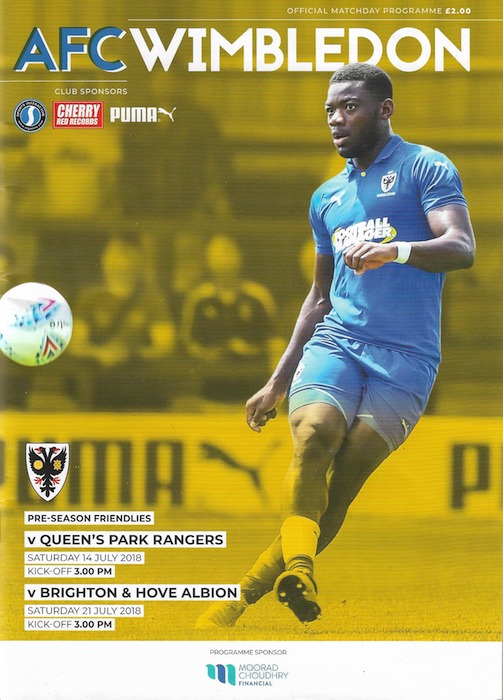 Darnell Furlong went off injured after 53 minutes and received sympathetic applause from the Rangers fans behind the goal as he was helped back to the dressing room. He was replaced by Osman Kakay.

A long ball down the middle was headed on by Matty Smith for Conor Washington, who turned, shot, but his effort went wide.

Around the hour mark, three further changes were made to the QPR line-up. On came Smyth, Wszolek and Baptiste at the expense of Smith, Eze and Lynch respectively.

Rangers enjoyed the larger share of possession and chances were still being created at both ends.

Paul Smyth livened things up and he headed over the bar from a corner. Matt Ingram made a very good save following a free kick from the right flank.

Smyth was bundled over just outside the box and Washington’s free kick was blasted well over the bar.

Matt Ingram made an outstanding save from close range from, I think, Kwesi Appiah.

Osman Kakay fed Conor Washington who, on approaching the Dons keeper, pulled the trigger, but Tom King stopped the ball with his body. Bright Osayi-Samuel replaced him on 80 minutes.

With a minute or so to go and the game seemingly heading for a draw, Paul Smyth took control of the ball wide on the right and knocked it into the six-yard box. Tom King failed to smother the ball and it ran loose to a well placed Luke Freeman who calmly slotted the ball into the back of the net.