As we went through the security scanning process at Heathrow, I looked over (as was everybody else) at the passenger who had removed his trousers and was awaiting further inspection in his y-fronts!

We flew out with German Wings, destined for Berlin’s Tegel Airport. Our hotel was located close to ‘Checkpoint Charlie’ and also staying there was R’s fan James Luck with his good lady Carol.

Dec and I set off the following morning in plenty of time for the Stadion An der Alten Forsterei, (stadium at the old forester’s house and opened in 1920), which was just as well as the journey was nowhere near as smooth as we had anticipated.

Eventually, and thankfully, we came across a Union fan and we travelled along with him for the final leg. A Belgian football fan, with no affiliation to either side, later joined up with us.

We left them outside the station and walked on towards the ground. We soon bumped into Ron Hill and Roy Clark who told us where we could pick up some match programmes.

The programme seller directed us to the away fans entrance, which involved a detour along a tree-lined path, adjacent to a river.

As I approached the stewards, one of them asked to look in my bag, which contained the Indy’s flag. Not surprised at that, but he gestured me over to a kiosk where the guy stated that I should collect it after the match!!!

Well, I wasn’t having any of that: “This flag has come all the way from London mate”. Eventually a steward came over to investigate. He gradually warmed to my request and he asked me in broken English if it was a small flag? It isn’t and this resulted in me having to unfurl it (slowly) in front of him.

Eventually we became best mates and he agreed. I re-joined Dec and we headed towards the turnstile, paid the 12 euros and walked up to the away terracing.

I wanted to secure the flag before I did anything else and Dec set off to purchase the beers. No other flags were yet on display so I spoke to the steward who was standing pitch side. He got me to throw it over the fence and he actually tied it up for me!

With that out of the way it was time to catch up with other supporters. Apart from the R’s fans I knew there was also a group from Poland. 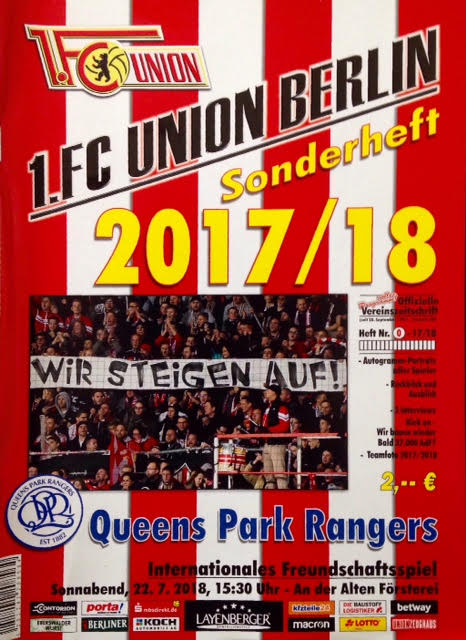 Other flags were now going up, which included one from Norway and another from Scotland etc.

Right on cue, the heavens opened just as the game kicked off. The monsoon conditions included cracks of thunder and bolts of lightning, which prompted Rangers fans to retreat towards the back of Block Z2.

Alex Smithies did make a superb save, but most eyes were focused on the referee and the state of the pitch. The players were taken off in the 13th minute and there was absolutely no way the game was going to re-start.

Once the cessation of the match was confirmed, the Rangers players walked over to applaud the fans, but as they headed back to the dressing room, some light hearted boos rang out.

They soon realised that we expected them to emulate what the Union players were doing by diving across the waterlogged pitch!

The PA announcer was well prepared with his selection of tunes; ‘Why Does It Always Rain On Me’ from Travis, the Supertramp song, ‘It’s Raining Again’, plus the inevitable ‘Singing In The Rain’, which was followed by, ‘Always Look On The Bright Side Of Life’.

After meeting up with James and Carol, we headed for the bus stop to the strains of ‘London Calling’. 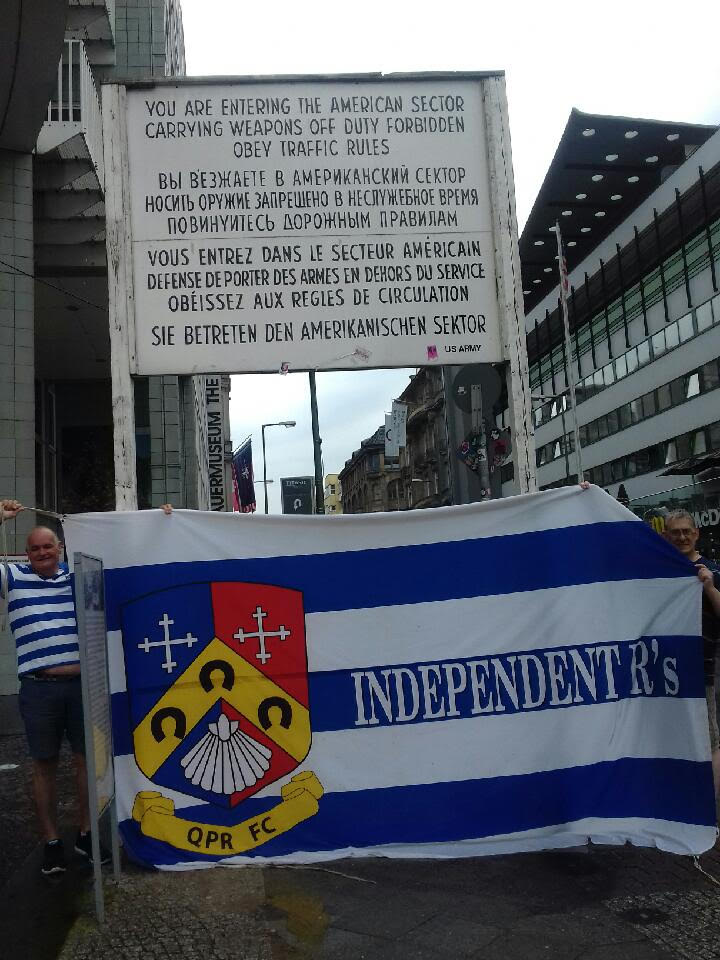 I noticed another R’s fan on the bus, and complete with his baggage trolley, he told me that he had flown to Berlin after being on holiday in Spain.

The storm continued throughout the night and the next morning it was still raining so we decided that the match in Leipzig was doubtful.

It did take place of course and Rangers lost 3-2. We flew back to Heathrow on Monday afternoon and that evening we learned that QPR had lost the re-arranged match with Union Berlin, 2-1.

(My thanks to Dec for the above pic and for sorting out the trip. Also to Kel for the lift to the airport and for later dropping me home)

One thought on “The Trip to Berlin & the 12 Minutes, 38 Seconds of Football”