Taddy & Co. produced three sets of cards in their Prominent Footballer series. This is the 15th and final QPR card from the first series that was issued in 1907.

On the reverse side of this original card it reads: ‘A ripe, full flavoured Pipe Tobacco, fine cut. In a good well-seasoned briar or a well-coloured meerschaum it will be found an admirable tobacco.’ 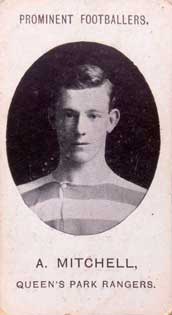 The legendary Archie Mitchell was born in Smethwick on 15th December 1885. He joined the Rangers from Aston Villa in 1907 and made his debut on 2nd September against Tottenham.

He made 467 appearances before moving on to Brentford as player-manager in 1921. Archie later coached overseas and then went on to manage Dartford in 1928 before re-joining QPR as a coach.

In November 1931 he was appointed manager and remained in charge until the end of the 1934/35 season.