Just a short time ago at the National Football Museum in Manchester, a select gathering of guests representing football, the media and major Christian organisations attended the launch of my DVD about famous football clubs of church origin, one of which, of course, is QPR.

The DVD is based on my book ‘Thank God for Football!’ and has the same title. It was released in the USA in August and is to be broadcast worldwide in six instalments as a TV documentary, even in China, Japan and Vietnam where my voice will be dubbed into the respective languages. I’m intrigued at the prospect!

All 12 clubs that feature in the documentary warmly supported the production and allowed the film crew unlimited access to all parts of their stadia. Many clubs even provided archive footage and images for the programme.

Among the guests at the Manchester launch were Lord Grantchester of the All-Party Parliamentary Football Group; Revd Dr Kirsty Thorpe, Moderator (leader) of the United Reformed Church in the UK; Rt Revd Tom Williams, RC Bishop (acting Archbishop) of Liverpool; legendary BBC TV football commentator John Motson and ex-England striker Cyrille Regis, only the third black footballer to play for England. Such is the interest in the project that I’ve just completed 15 radio interviews, ranging from BBC Radio Cumbria in the north to BBC Radio Guernsey in the Channel Islands.

The 3-hour documentary, which I wrote and presented, was produced by the Christian Television Association, an award-winning TV production company. We filmed in countrywide locations during the summer and autumn of 2012 at places that aren’t usually associated with football, including the White Cliffs of Dover, the Pembrokeshire coast, St David’s Cathedral, Cambridge University – and even the cellar of a Barnsley pub!

Each episode in the documentary begins with a visit to the stadium of the respective club. Here the club’s greatest successes are described and images shown of three of its greatest players, with a brief account of their achievements. In the case of QPR, the legends are Rodney Marsh, Gerry Francis and Stan Bowles.

To tell the story of QPR’s birth, we filmed for a considerable amount of time on the delightful Queen’s Park estate. Although over 140 years old, it’s still magnificent with its tree-lined avenues and houses of striking architectural interest.

After shooting the streets in which most of the early players grew up, we headed for St Jude’s Hall in the centre of the estate. Now a community centre, it was formerly St Jude’s Institute, a mission hall opened in 1885 by the vicar of St Jude’s Church, the Revd Sidney Bott. It was here that St Jude’s Institute FC was formed in 1885.

When the club merged with local rivals Christ Church Rangers FC in 1886 to form Queen’s Park Rangers, the Institute became the HQ of the newly formed club and remained its HQ for the next 12 years. A plaque was erected on the building in 2011 to commemorate QPR’s 125th anniversary.

Other locations we filmed in the locality were Droop Street Board School, which many of the early players attended, and Christ Church Mission, the cradle of Christ Church Rangers on the nearby College Park estate.

Three QPR personnel took part in the programme. Former Football Outreach Development Manager Dave Robinson talked about the developing link between the club and the Queen’s Park estate since the unveiling of the plaque at St Jude’s Hall.

Andy Evans, Chief Executive of QPR in the Community Trust, talked about the Trust’s work in the local community. He described the spirit of service to the community as part of the club’s DNA which it had inherited from the church. Andy mentioned some of the initiatives spearheaded by the Trust using football as a vehicle. These included workshops to combat the dangers of drugs, alcohol and gang membership.

Club Chaplain, Revd Dr Bob Mayo, referred to some of the pressures that players face today, particularly the risk of injury and the insecurity of short-term contracts. Bob said that the Chaplain is there as a reassuring presence when crises arise, and that at such times the Christian faith can provide a safety net.

In an age when football is dominated by billionaire owners and the relentless pursuit of success, I found it refreshing to hear about so much good work going on at the clubs we visited. I was also greatly encouraged by the heartfelt support they gave us in the production of this documentary – a sure indication that they haven’t forgotten their humble origins or their founders. 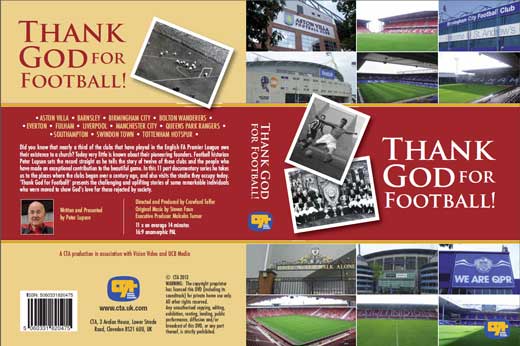 The DVD can be ordered through bookshops or bought directly from: www.cta.uk.com

For those interested in watching the series on TV, it will be aired on UCB TV (Sky Channel 585) at the following times:

One thought on “QPR on World-Wide TV Documentary”