March 1994 was a good month for QPR. In the last few weeks I have featured the 1-1 home draw with Manchester City on the 5th and also the 4-3 win a week later at Carrow Road.

The R’s travelled to Portman Road on the 26th and the following match report later appeared in the local Gazette:

‘Rangers scored a tremendous 3-1 victory at Ipswich on Saturday when Andy Impey came back from suspension to score two stunning second-half goals.

Impey, unavailable for the last three matches, raced through the Town defence to score one of the goals of the season. He beat three men before tucking home a left-footed shot to put QPR 1-0 ahead.

The same player added goal number two by heading home a Ray Wilkins cross, and Les Ferdinand completed victory when he raced onto another pass from the R’s skipper before finding the net.

Only a scrappy late goal by Guentchev at the far post made the score respectable for Ipswich, and it was a tremendous win against the odds for QPR. 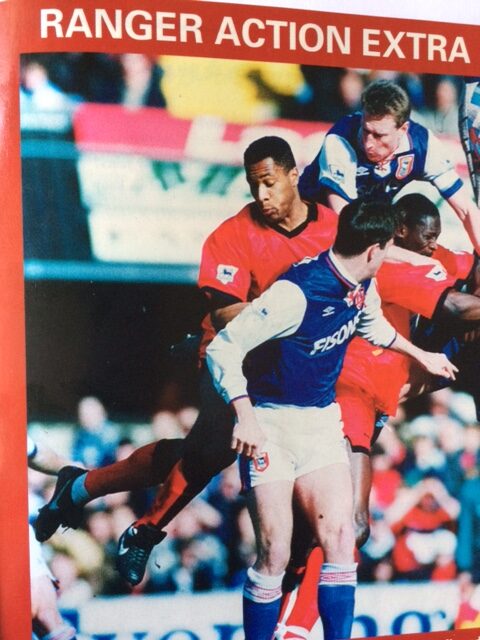 Not only had the team’s match build-up been disturbed by a week of newspaper speculation, they also had to suffer the loss of £2.7m defender Darren Peacock to Newcastle and a host of injuries.

Both Trevor Sinclair and Michael Meaker picked up knocks in training on Friday, while David Bardsley was absent on compassionate leave and Tony Witter, Danny Maddix and Alan McDonald were still out injured.

That left Alan McCarthy, only just back from a spell on loan at Plymouth, to plug the gap in defence – alongside fellow youngsters Karl Ready and Steve Yates.

“It was the youngest back-four I’ve worked with,” said manager Gerry Francis afterwards.

“So I was delighted with the result. Considering all the problems on and off the field, and losing Darren Peacock which was a big blow, I’m delighted to win.”

“We have had a tremendous run in March and this puts us seventh with two games in hand. If we carry on in that way, we could be a bit dangerous by the-end of the season.”

Rangers had little to show for their first-half efforts on Saturday, with Simon Barker missing their only real chance despite dominating the play. But a half-time pep-talk by Francis certainly did the trick.

“I had a go at Andy Impey,” the R’s boss admitted. “He’s a little bit slow at getting on the end of things. He works ever so hard going back but he needs to be more positive.”

“When he goes forward he can be unstoppable, and he proved that in the second-half. They were tremendous goals.”

Rangers went on to lose 1-4 at Oldham the following week!