This was my first visit to the Cherry Red Records Stadium. Starting for the home side was former Rangers player, Chloe Sampson.

It was AFC Wimbledon who provided the early pressure in what was a bit of a scrappy start to the match.

Emily Donovan’s low shot from the edge of the box was kept out by Katie McLean and the ball went behind for a corner. Ashlee Hincks stepped up to take it and not surprisingly she continued to do so throughout the match.

Whilst for the R’s, Ellie Searle bombed down the left-wing to the bye-line and her cross was then smothered by the keeper.

In the 19th minute, a superb through ball dissected the Rangers defence and Katie Stanley’s shot ended up just wide of the far post.

At the other end, Brogan Moore tried her luck from around 30 yards, but the effort was comfortably held by the keeper.

A Wimbledon fan spent his time popping up in different areas of the stand in an attempt to engage the home supporters in various chanting. Half-time: 0-0. 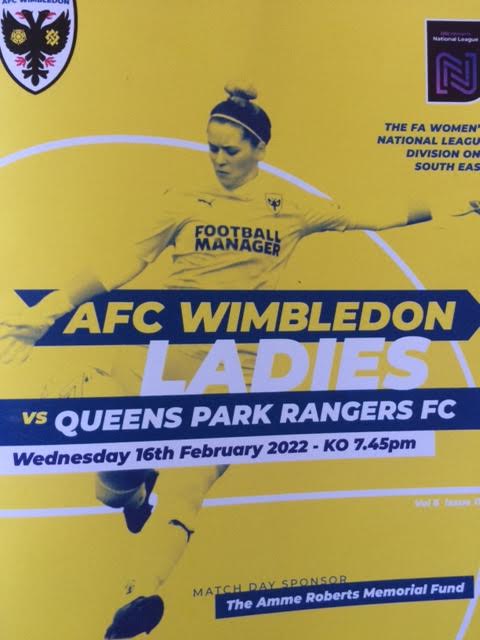 Five minutes into the second-half and Katie Akerman was brought on at the expense of Sue Kumaning.

The Dons almost took the lead after a back-pass fell short of the R’s keeper, but she stood firm and the effort came off her legs to safety.

On 75 minutes, Rebecca Sargent headed just wide following another dangerous corner from the Dons No. 9.

With the match looking like it was heading for a draw, AFC Wimbledon took the lead in the 81st minute when Kelly Highman chipped the ball from just outside the box into the top right-hand corner.

The final Rangers change was made when Kasha Petit made way for Alice Curr.

The Dons doubled their lead in added time after Ashlee Hincks had broken away and proceeded to beat the R’s keeper on a one-on-one to notch up her 31st goal of the season.

So, it was a first defeat in 2022 for Steve Quashie’s side,whilst the Dons unbeaten run was extended to 13 matches.