There were about 200 fans in attendance for this final U23 Premier League Cup group match.

A significant number of the Blackburn fans were braving the cold to watch Rovers’ captain for the day, Bradley Dack, on his return from a longstanding injury.

The scenario was that a win, draw, or even a two-goal defeat would be sufficient to see Blackburn progress. “All” QPR needed was a three-goal winning margin.

Not surprisingly, QPR dominated the early possession and took the lead on 15 minutes when Kargbo headed a corner onto the unmarked Ajose, who nodded past a stranded keeper.

Rovers had offered no real threat at this point – so it was disappointing to see Bradley Dack score a simple equaliser, a few minutes later, from what was really their first attack of the match.

Rangers continued to have the majority of possession and Dom Ball forced a great save from the Rovers keeper following a neat passing move and centre-forward HamzadKargbo was thwarted by the keeper’s legs just before half-time.

We had certainly created some good chances during the first 45 minutes and probably deserved to be in front at the break. However, the warning signs were evident that Blackburn were dangerous on the counter-attack.

Rangers were now playing with a back-three and recent recruit Joseph Ajose taking up the Uncle Albert role of right wing-back.

The midfield of Ball, Dozzell and Bettache then totally took over the game with Thomas and Mema providing some great movement to support Kargbo and creating plenty of problems for the home team.

The Rovers defence did really well to withstand this pressure with great blocks on goal-bound efforts from both Bettacheand Thomas.

Kargbo then had another shot blocked, but the ball fell to Dozzell who calmly passed the ball into the net from about 15 yards out.

Rovers continued to look dangerous on the break with one shot hitting the crossbar and another breakaway resulted in a good save by Halwax, who was ably assisted by wing-back Joseph Ajose who had forced the Rovers man wide.

This was now like a schoolboy game of attack and defence – absolutely great to watch and amazing that we got to 70 minutes with the score-line at only 2-1.

QPR increased their lead on 70 minutes when Kargbo latched onto a rebound from yet another blocked shot to make it 3-1.

Armelindo Mema was now finding more space on the left-hand side and scored a great goal on 81 minutes to make it 4-2.

And then an even better strike on 89 minutes to put us 5-2 in front (with the desired three goal advantage). Brilliant – what could possibly go wrong from here?

Four minutes of added time were signalled, and the match continued in the open style of the previous 90.

Time was pretty much up on my watch when Rovers headed home their third and surely now, decisive goal. 5-3, the locals were understandably delighted as indeed were the Rovers players!

Undeterred, Rangers got the ball from the restart and substitute Shiloh Remy took on two defenders and pulled a cross back from the bye-line. He had done really well to get the cross away, but it looked as though he had overhit it.

Thankfully Hamzad Kargbo didn’t think so. Under challenge from a defender, he met the ball beyond the far post and his thunderous header rocketed into the back of the net.

Celebration time both on and off the pitch. The referee calling an end to a wonderful game as soon as the goal was scored.

A special mention to fellow QPR fan, Bernard Lambert, who had taken a series of buses to get to the game which was followed by a three-mile walk in the Lancashire countryside. The very least I could do was to drop him back home after the final whistle. 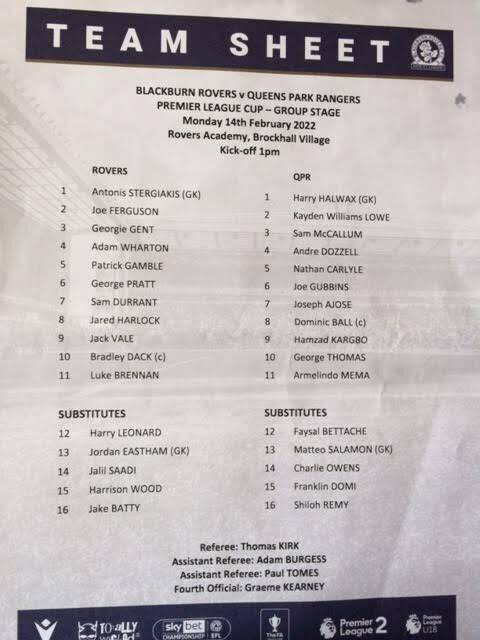 This fixture was originally scheduled for the more-plush venue of the FA County Ground, Leyland, but was suddenly switched to the Blackburn Rovers Training Academy at Brockhall Village.

The consensus of opinion amongst some spectators (out of a total of approx. 200) was that following over two days of non-stop rain the Lancashire FA did not want their pitch messed up.

The first-half was quite even but Rangers took the lead with a soft header from Ajose after 15 minutes and 5 minutes laterBlackburn equalised via Bradley Dack. The half-time score was 1-1 and looked as if the match could go either way.

In the second-half there was an avalanche of further goals; two by Kargbo, two from Mema and one by Dozzell, plus the two scored by Blackburn themselves, as the R’s took command.

A superb shot by Mema for his first was the best of the match The Rangers midfield with Ball and Dozzell proved very strong indeed.

This 6-3 victory put QPR through to the next round and was well deserved. Overall a very entertaining game.

A pity that the facilities did not match the quality of the football. Mud, soggy grass and puddles everywhere for the spectators to stand in. No cover,a ground situated in the middle of nowhere with more fields and wilderness than I have had hot dinners!

I had a nightmare journey getting from Blackburn town centre by bus and even then, I still had over a two-mile walk.

My many thanks to Martin for giving me a lift back to civilisation after the game.