On 21st January 1893, the Southern Times & Dorset County Herald reported that Queen’s Park Rangers would be making a tour to Dorset during the Easter period.

‘A match has been arranged with Weymouth, and other engagements are likely to follow.’

Two match reports, both played against Weymouth, appeared in the local press on 7th April:

The game was of a high order, the passing on both sides being well placed. Owing to the dry ground the ball was very light, and both teams gave a good exhibition of heading.

Masterman for Weymouth and Sturges for the visitors played a grand game at back.

Both sides were very strong in the defence, and the game ended in a draw with no goal scored. There were about 2,000 spectators present.’ 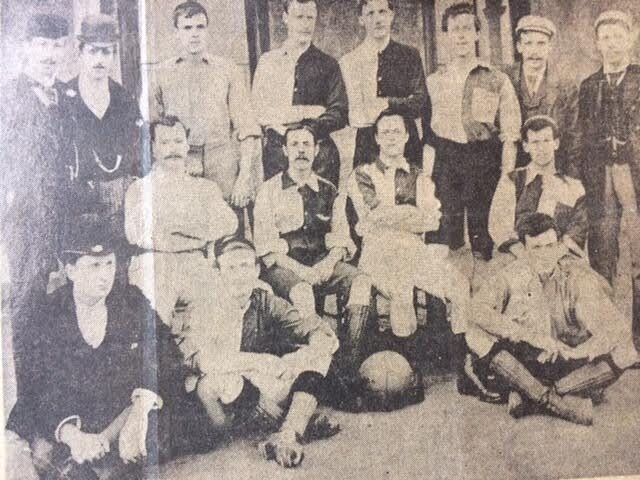 The other game was played on the Friday:

This match, played on Friday, resulted in a win for Weymouth by two points to nil. There were about 3,000 spectators, which is believed to be a record “gate” for Dorset, and the management deserve credit for the excellent arrangements for the comfort of the public, the ground being well kept throughout.

Weymouth was without one or two of their first eleven and had to work hard for their victory.

The visiting team were light but speedy and played well together, the defence being particularly strong.

Grant, for Weymouth, made a run and passed to Bussell, who sent the ball back in the mouth of the goal, where Grant with his head, sent it through. The first-half ended without further scoring.

During the second-half the game was very even, the defence on both sides being well maintained.

Just before time, Newport took a long shot and landed it in the corner of the net, making the second point for Weymouth.

Queen’s Park made several shots at goal, but Duncan between the posts was invincible.’

Unless more information comes to light, those two matches against Weymouth at their Westham ground, were the only two actually played in what was supposed to have been a tour of Dorset.

(Thanks to Colin Woodley for his assistance. The team pic is from my collection)