The very sad passing away of top QPR man and great bloke, Keith Davies sadly came as no surprise.

With heart, bowel cancer and movement problems, especially over the last 2/3 years, Keith did so well to get to home games with difficulty, up until the 2019/20 season, pre-Covid.

I met Keith in 1964. We were getting autographs over the Ellerslie Road gates, which in those days was the main entrance for players, staff and fans.

Not even knowing each other on the day, we became good mates and had been ever since.

Away games with Mrs Biggs running the coaches, became regular for us. As the R’s got bigger and better, foreign pre-season tours in the mid-70’s also became regular and of course, in 1976 and 1984 the UEFA Cup trips.

Keith was always there. For him, like us all, to play in a European competition was a dream come true.

Even in the bad years, Keith never gave up, not missing a home game for about 60 odd years, and still going to most away games.

Keith’s first ever favourite player was our brilliant winger, Clive Clark, in the late 50’s/early 60’s. Clark got West Brom’stwo goals at Wembley in our 3-2 win in 1967. He was really good for us and was Keith’s type of player, as were his other favourites, Stan and Rodney. In more recent years Adel and Eze became his favourites.

Keith himself was a very good player, playing regularly every Sunday for Aldenburg FC. When Keith was in his midfield role, he was Clark, Rodney, Stan, Adele and Eze rolled into one.

His one and only favourite player outside QPR was Denis Law. Older fans will remember that Law would hold his shirt cuffs all game. Rodney copied him, and so did Keith.

In his time, like many, Keith had a lot of football ups and downs, promotions, relegations, cup final defeats, cup final wins and a play-off defeat, but in his life, he never gave up.

A lot of fans would know Keith to look at, especially with his curly hair, without knowing him personally, standing opposite the reception at home games, talking with his mates.

A few seasons ago, Keith passed out at the Leeds home game and was taken to hospital. After that he got back to games again, but something wasn’t right, and again he passed out at different times in Ealing Broadway and Harlesden.

Keith kept his illness problems to himself, the ones I mentioned at the start. Two or three of us knew, but that was because we were helping him get things and get about.

A couple of weeks before Keith passed away he was admitted to hospital. He could not use his legs and he was finding it difficult to talk, breathe and move. Keith just lying in bed is just not Keith.

When visiting Keith in hospital and in the hospice in his last couple of weeks, I believe he knew what was coming. He still made no fuss, chatting about QPR in short spells, and the old days.

As it said in the recent match programme v Forest, the referee had blown the final whistle for Keith. He had just reached 72.

He passed away knowing that family and friends cared for him. His two nieces, his big friend Bob O’Toole, great neighbour Dorothy and more friends, all cared.

Keith had a lovely family, his Mum and Dad, and his brother Ray, who passed away in 2014. Ray also played for the QPR Youth team in the very late 50’s, so that made Keith feel good.

The Keith that has left us was not the real Keith we knew. I hope people understand when I say that some things happen for the good. Keith is still supporting QPR, and always will.

Up there he is still Clive Clark, Rodney, Stan, Adele and Ezeall rolled into one. 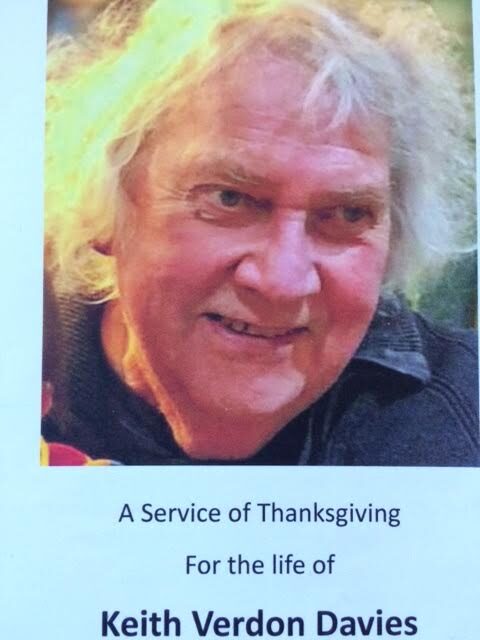 My first memory of Keith goes back to the 70’s when having left school and starting work, I could afford to regularly go to away games. I didn’t really know him then, but he was one of the familiar faces you would see on station platforms up North somewhere or pass in the street walking to a far-flung northern turnstile.

Sometime in the early 90’s (I struggle to remember the exact year?), Rangers were told by the Health & Safety authorities that the South Africa Road stand wouldn’t get its safety certificate unless some new entrances were provided.

From then on, I had the pleasure of having Keith sitting just over my right shoulder in the row behind.

He immediately proved to be an astute judge of play and tactics. Quiet, laid back, he would calmly point out a player’s weakness, or a change of tactics either required by us, or even made by the opposition.

As a regular at the reserves and youth games, he was also a mind of information about what was going on behind the scenes. If a youngster was making his debut, or had been promoted to the bench, Keith could always be relied upon to give you a summary of his style of play and whether he was going to make it, or, if he was not really good enough.

I clearly remember his excitement when Eze was called into the first team for his debut in the FA Cup. Keith was convinced that he was one of the most gifted young players we had for a long time and on his recommendation we all eagerly waited to see what he was like.

Keith always referred to Eze as “Ebenezer” and I can still hear him saying that when I see Eze on the TV for Palace.

He was not only a good judge of a player but could also more than hold his own on a wide range of subjects. Keith loved the horses, and enjoyed a modest bet, and always wanted to know the latest on the Grand National during a game.

Keith liked his boxing, could discuss the minutiae of the films of a host of producers and had an eclectic taste in music. He was a big fan of Jazz singer Madeleine Peyroux, which I only discovered after I mentioned that I had been to see her the night before a game at the Royal Festival Hall.

He also had a soft spot for Kelly Brook, but I don’t think that was due to her voice……!

As I said, Keith was a very laid back and calm individual, but two things could be relied on to get him going. He loathed late-comers, or people who left their seats before the final whistle.

He would rise to his feet with an audible grumble as they came along his row, or if in front of him, they would be subjected to a loud “SIIITT DAAAAN”!

Keith also had no time for Ian Holloway, who he referred to as “Jethro”, or “Hollow Head”.

This became a jokey disagreement between us, as I think we owed Ollie a lot for his achievements in getting us back to the Championship. He would often text me in a jokey way if Grimsby lost during Ollie’s last managerial role.

He liked the ball moved around in midfield, neat passing and skilful play. Keith was never a fan of the direct ball up to a big man and this was I believe to be the root of his dislike of Ollie.

Keith wanted us to play with style, panache. His Rangers was a team with a Rodney, a Stanley, a Stainrod, an Ebenezer….

He was Rangers through and through, one of those characters who had blue and white blood in his veins.

Keith was an institution, standing with his back to the White City Estate wall, opposite the box office at every game with his friends, discussing all-things ‘Hoops’ and life in general.

He will be missed by us all, but while we still remember him, a part of Keith will always be there at the Rangers, part of the pre-match conversation, giving late-comers the evil eye, and beaming at a player who drops his shoulder, shows the defender the ball and in an instance goes past him. 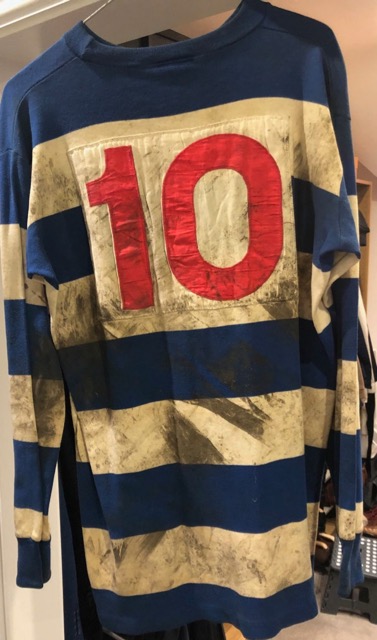 Keith’s neice, Karen Smith, told me that he was born in Tylorstown, in South Wales, on 18th September 1949.

I had known Keith for quite a long time and apart from the Rangers, I eventually got to know him even better through our shared interest in cricket, music and films.

Keith recommended Ken Loach’s very moving production of ‘I, Daniel Blake’. After I’d seen it, I made sure I phoned him to talk about it.

On a visit to Keith’s flat, he brought out the Stan Bowles shirt I had heard so much about. Still caked in mud and with evidence of blood stains, it even adorned stud marks!

He told me that he received it from Gordon Jago after that memorable night at Roker Park in 1973 when the R’s had defeated the FA Cup winners 3-0.

Over 40,000 Mackem fans were there that night and many of them invaded the pitch after the Cup was deliberately knockedoff its pedestal! Stan scored two and Dave Thomas got the other.

Keith used to work with Gerry Ryan at Rolls Royce in Willesden and had promised the shirt to him. It was presented to Gerry after Keith’s funeral at the Royal Oak in Harlesden.

Also working at Rolls Royce was Glen Matlock’s father and I think, for a while, Glen himself.

Keith told me one day that after he had been diagnosed with bowel cancer four years previously, he had decided that he didn’t want to be operated on.

I can’t pin-point Keith’s last Rangers game, but he would have been as usual across the South Africa Road pre-match, opposite the box office.

Previously he had to give up attending U23’s games at Harlington. He wouldn’t make a fuss, but I would keep him informed by texting him the line-up and match updates.

As Keith’s health began to deteriorate, he had to be admitted to St. Mary’s in Paddington. Visiting him there was kept strictly to one visit per day. When I did get to see him, despite being very poorly, Keith still greeted me with a smile!

Keith was later moved to a Wembley hospice and it wasn’t long before Alan Barnes phoned me with the awful news!Then Karen got in touch after she had picked up my number from Keith’s mobile.

On 2nd November, we entered St. Mary’s Church in Willesden to the strains of Dylan’s ‘Forever Young’. Father Chris Phillips welcomed us and the Cup Final hymn: ‘Abide WithMe’ followed.

The eulogy was given by Keith’s childhood friend, Bob O’Toole and we all joined in with a minute’s applause in Keith’s memory.

Cher’s version of Abba’s ‘Fernando’ ended the Service before Keith’s coffin was taken to the Willesden New Cemetery.

As Paul wrote above: “He will always be there at the Rangers, part of the pre-match conversation.”

One thought on “In Memory of our Mate, Keith Davies – ‘He will always be there at the Rangers, Part of the Pre-Match Conversation…’”