On the 29th October 1960, the R’s travelled to Saltergate. The following match report later appeared in the Hammersmith & Shepherd’s Bush Gazette:

‘Alec Stock, Queen’s Park Rangers manager, was forced to make wholesale forward changes for the Third Division encounter away against tough Chesterfield on Saturday, because key-men Clive Clark and Jimmy Andrews were unfit to play.

But his gamble paid dividends as new inside-right Peter Carey scored the solitary goal which gave Rangers two more points to keep the club in the promotion hunt.

Mark Lazarus and Mick Barber played on the right and left-wings respectively, and Brian Bedford switched to inside-left, with Ken Whitfield back at centre-forward. Burly Peter Carey, normally a wing-half, came in at inside-right.

The ever-reliable Rangers defence gave Chesterfield’s forwards few real chances but were under considerable pressure in the opening stages of a mud-bath game. 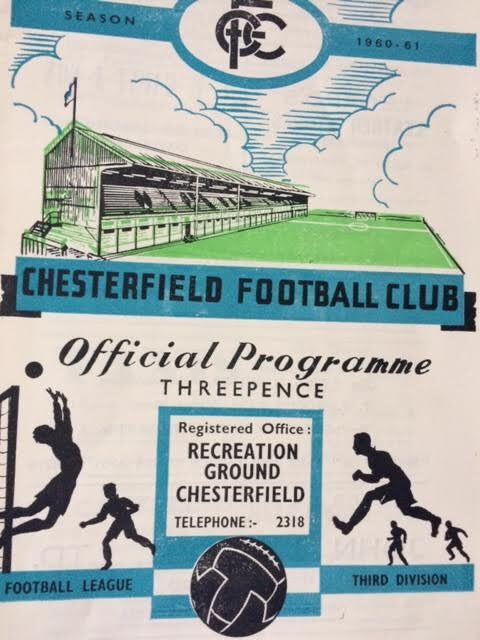 Rangers went closest to scoring when in a breakaway, Whitfield missed a good chance from Lazarus’s pin-point pass after six minutes’ play.

Whitfield started the move which resulted in the match-winning goal for Rangers in the 23rd minute. Lazarus latched on to the ball and made ground for the tall Carey to head past goalkeeper Powell.

The strong Carey, signed from Leyton Orient at the beginning of the season, revelled in the conditions and proved that he is a most valuable utility player to possess. He has already played at right-back, right-half and left-half in the league team this season.

In other dangerous Rangers raids, Barber shot straight at Powell with the goal at his mercy and Whitfield was out of luck with two shots which Powell brilliantly saved.

Rangers escaped when Chesterfield’s left-winger Maddison slipped in the mud at the vital moment with the goal at his mercy.

The visitors had to withstand a heavy barrage as Chesterfield struggled in vain for the equaliser in the closing stages.’

At Loftus Road the following Saturday, the R’s knocked Walthamstow Avenue out of the FA Cup.

(Thanks to Colin Woodley for unearthing the match report)