The following fascinating article appeared in issue five of ‘The Ranger’ (‘The Official Newspaper for Supporters of QPR’), in the Autumn of 1994.

‘Rangers have been presented with a pennant designed by Second World War prisoners. It was originally made by a group of merchant seamen who were all QPR supporters.

They were captured at sea and ended up in Milag Nord Prisoner of War Camp near Bremen in Germany.

The lads formed their own football team and challenged a group of Geordies in the camp to a North v South match.

As the war raged on, the football became a necessary diversion for the prisoners. The two teams met four times in their own ‘Cup Final’, with two wins apiece.

The men made two unique pennants to commemorate the matches. They used strands of wool plucked from their blankets. 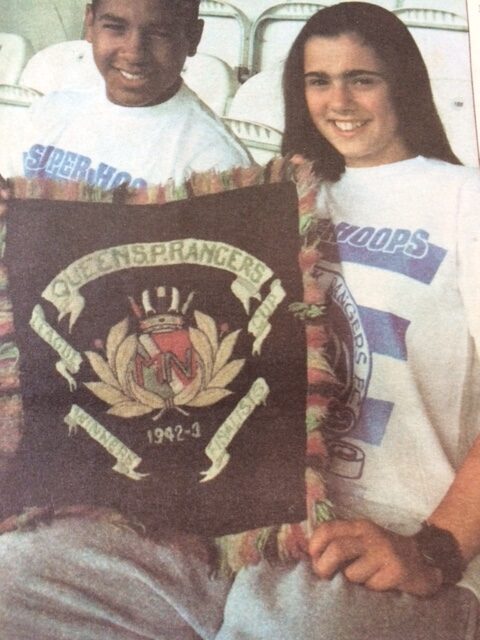 When the war finished, ex-P.O.W. John Beck, took the “Queen’s Park Rangers 1942/3” pennant home with him as a souvenir of his playing days at the camp.

John died in 1990, but the much-travelled pennant was unearthed recently by Audrey Hope in Gloucestershire.

She said: “I am donating the pennant to QPR – where it rightly belongs. It confirms the importance of Britain’s most popular sport and my belief is that if it had never existed the inspiration to survive could have been seriously impaired.”

I remember it being briefly on display in the Blue & White bar.

The headline to the article reads: “POW’s pennant back where it belongs’, but apparently it was later sold in an auction!

(The two youngsters shown above posing with the pennant are Marie Lowe & Kenrick Dyer, who were on work experience at the time)