Rangers opened their 1900 FA Cup campaign with a 3rd round qualifier on 3rd November. The following match report later appeared in the Kilburn Times:

‘The Rangers made their entry into the English Cup competition on Saturday last. Fulham were their opponents, and the result was in favour of the Rangers by 7 goals to nil.

The score was the same, and the losing teams played a most lackadaisical game, and appeared as if they were indifferent as to the result.

McConnell was left out of the team, Newlands being given his place, and Newbigging not being eligible by two days, his place was taken by Goldie.

The first goal came from a grand oblique shot from the foot of Gray, which gave Head, Fulham’s goalkeeper, no chance to save, and was scored before the game had been in progress four minutes,

The second followed a corner nicely placed by Downing, which went out to Foxall, who centred, and Downing headed past.

Goal three was the best of the match, Foxall made a fine run down the wing, and from his centre from almost the corner flag, Goldie “hooked in” one of the best I have seen this season.

Number four came from a lightning shot from Foxall, who received a nice pass from Humphries – this was the first goal that Foxall had actually scored whilst he has been with the Rangers. 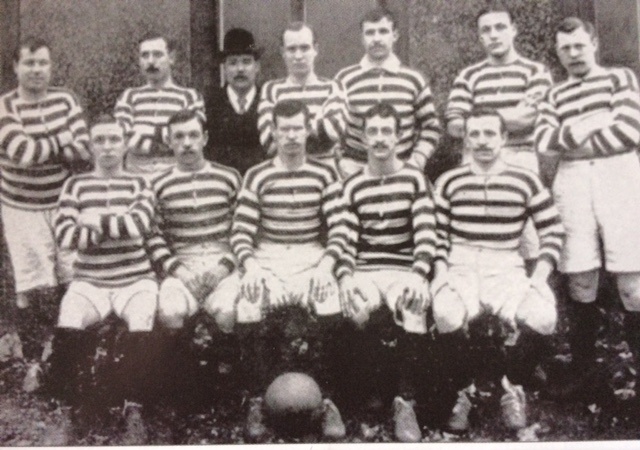 The second-half commenced in a similar fashion to the first, Foxall shooting number five from an awkward angle four minutes from resuming.

Then the Rangers eased up a little, and several good opportunities of adding to the score were missed.

The referee gave some very peculiar decisions that roused the ire of the spectators, Humphries got through nicely and scored, but was given offside; it was such a flagrant mistake that the Rangers’ supporters chaffed the ref, unmercifully, and he directly afterwards gave a penalty against the Rangers, but Clutterbuck managed to prevent the visitors from scoring, amidst the roars of laughter from the crowd.

After the match, I asked the opinion of the linesmen, both of whom said positively that a penalty ought not to have been given.

The Rangers soon obtained their sixth. Foxall tricking the defence and centering, Hitch sent in a long shot which scored.

The seventh and last came from a centre of Gray’s and was headed in by Goldie, the score being 7-0.

The Rangers’ forwards played a clever game, Foxall, the left-winger, being the best of the bunch. Bellingham also gave a good exhibition, whilst Newlands only missed by inches scoring a goal of his own. Clutterbuck had very little to do.

Fulham have a very good half in Miller, but Robertson, their flier, never had a chance, Keech and Bellingham being too much for him. The gate was about £120.’

QPR then met Watford and following a 1-1 draw, moved on into the next round with a resounding 4-1 victory in the replay.

(Thanks to Colin Woodley for uncovering the match report)