The league table as shown in the match programme states that after 36 matches, Rangers were on 53 points whilst Bournemouth were two points behind having played one game more. A match report appeared in the Western Daily Press the following day:

With five games left, Rangers are four points ahead of Bournemouth and with a match in hand. Only a remarkable loss of form can prevent Rangers attaining Second Division status for the first time in their 50 years’ history as a professional club.

Sometime before the start of the game the gates were closed with a record 26,000 inside and nearly 10,000 outside.

In order not to disappoint the thousands of would-be spectators, the Bournemouth secretary, Mr Tom Locks, hastily organised a microphone to broadcast to those waiting outside. He, himself, gave the commentary.

The previous Bournemouth ground record was 23,782 at the FA Cup-tie with Wolverhampton on October 18th last year.

It was typical of football’s curiosities that Durrant should score the all-important goal. After trying seven other centre-forwards, Rangers recalled the ex-Brentford leader because of the late withdrawal of the injured Stewart.

Another old Brentford player took a big part in the goal. Rangers’ captain and centre-half, George Smith, went up for a corner, forced by Hartburn and lobbed the ball forward.

Durrant beat goalkeeper Bird to the bounce and headed over Bird’s head into the net.’ 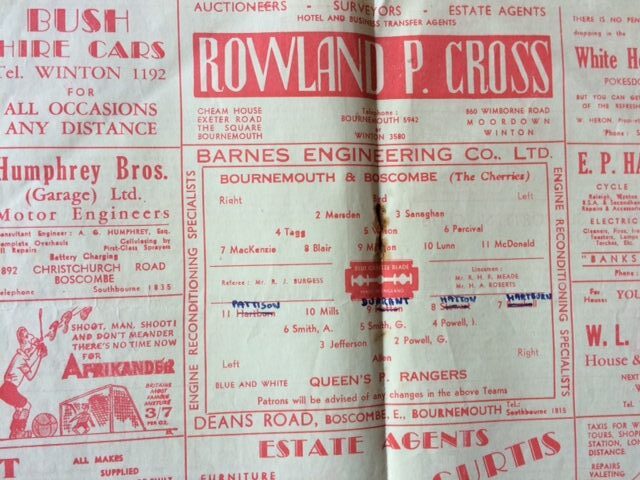 And from another report: ‘The game kicked off at 6pm, as was the norm in the days before floodlights, but it was so tense that good football was at a premium.

The only clear-cut chance of the first-half fell to Bournemouth centre-forward Doug Milligan, whose header was goal-bound when Reg Allen, playing just his second match after his injury at Derby, turned the ball round the post with a miraculous save.

As Bournemouth pushed for the goal they desperately needed, they were forced to leave gaps at the back which Rangers exploited with just 16 minutes left.

From a clearance following a Rangers corner, centre-half George Smith headed the ball back into the penalty area and over the Bournemouth defence who were rushing out to try and catch Rangers players off-side.

Fred Durrant read the ball perfectly and was able to chip the Bournemouth goalkeeper and put his side into the lead.’

Rangers followed this up with a 2-1 win at Exeter three days later, but the week after that they suffered a 2-5 defeat at Carrow Road!

But the R’s got back on track with a 1-0 win at Loftus Road against Newport County and then a goal-less draw in the penultimate game of the season secured promotion for the very first time.

(Thanks to Colin Woodley for his assistance. The match programme is from my collection)