The following article appeared in ‘Shoot’ magazine in 1976:

‘Last season the brilliant, exciting Queen’s Park Rangers suffered the agony of being pipped at the post by Liverpool for the First Division Championship.

It was a melancholy ending to a campaign that had been richly decorated with a sparkling mixture of silky skills and spirited running from a side with a refreshing, adventurous approach.

QPR boss, Dave Sexton, the quiet, modest soccer thinker behind the blue-and-white hooped dynamos of Loftus Road, while paying tribute to the power and cold professionalism of the men from Anfield, is convinced the colourful playing-style of teams like Manchester United, Derby County, and his own Rangers can hoist our standards to Continental level. 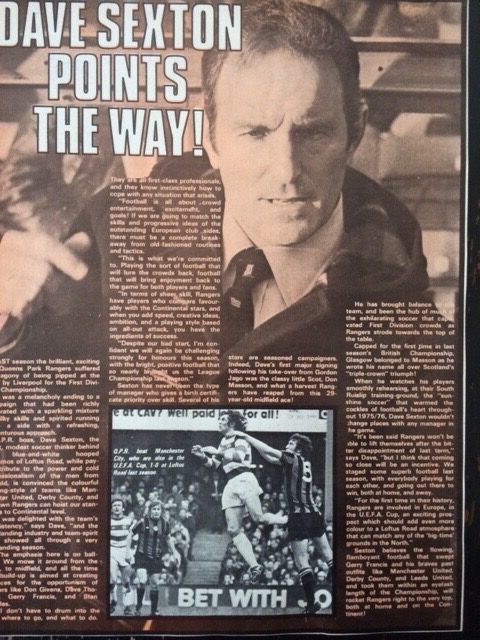 I was delighted with the team’s consistency,” says Dave, “and the outstanding industry and team spirit they showed all through a very demanding season.”

“The emphasis here is on ball-play. We move it around from the back, to midfield, and all the time the build-up is aimed at creating chances for the opportunism of players like; Don Givens, Dave Thomas, Gerry Francis and Stan Bowles.”

“I don’t have to drum into the lads where to go, and what to do. They are all first-class professionals and they know instinctively how to cope with any situation that arises.”

“Football is all about crowd entertainment, excitement and goals! If we are going to match the skills and progressive ideas of the outstanding European club sides, there must be a complete breakaway from old-fashioned routines and tactics.”

“In terms of sheer skill, Rangers who compare favourably with the Continental stars, and when you add speed, creative ideas, ambition, and a playing style based on all-out attack, you have the ingredients of success.”

“Despite our bad start, I’m confident we will again be challenging strongly for honours this season, with the bright, positive football that so nearly brought us the League Championship last season.”

Sexton has never been the type of manager who gives a birth certificate priority over skill. Several of his stars are seasoned campaigners. Indeed, Dave’s first major signing following his take-over from Gordon Jago was the classy little Scot, Don Masson, and what a harvest Rangers have reaped from the 29-year-old midfield ace!

He has brought balance to the team and been the hub of much of the exhilarating soccer that captivated First Division crowds as Rangers strode towards the top of the table.

Capped for the first time in last season’s British Championship, Glasgow belonged to Masson as he wrote his name all over Scotland’s “triple-crown” triumph!

When he watches his players smoothly rehearsing at their South Ruislip training ground, the “sunshine soccer” that warmed the cockles of football’s heart throughout 1975/76, Dave Sexton wouldn’t change places with any manager in the game.

“It’s been said Rangers won’t be able to lift themselves after the bitter disappointment of last term,” says Dave, “but I think that coming so close will be an incentive. We staged some superb football last season, with everybody playing for each other, and going out there to win, both at home, and away.”

“For the first time in their history, Rangers are involved in Europe, in the UEFA Cup, an exciting prospect which should add even more colour to a Loftus Road atmosphere that can match any of the ‘big-time’ grounds in the North.”

Sexton believes the flowing, flamboyant football that swept Gerry Francis and his braves past outfits like; Manchester United, Derby County and Leeds United, and took them within an eyelash length of the Championship, will rocket Rangers right to the very top, both at home and on the Continent!’

Dave moved onto Manchester United at the end of the season and whilst there he took charge of the England U21’s.