The new Park Royal Stadium hadn’t been completed so Rangers were still playing at the Agricultural Showground half a mile away.

On 19th October 1907 they took on Portsmouth. The following article was written by Titybus (honest!) and appeared two days later in the Athletic News:

‘Beyond all argument, at least so far as I am concerned, Queen’s Park Rangers are entitled to the distinction of being classed by themselves as the best team in London!

I steadfastly decline to give my reasons for this opinion, but any sceptical reader may consult the charts of the three leagues, and draw the same conclusion as myself.

The Western Railway Company have a station called Park Royal, and at the present time these premises are being used as dressing rooms for the teams, and as apartments for the directors. That, I think, is a novelty, but there is a reason for all things.

Queen’s Park Rangers have just laid out a new ground, which is a hop, step and a jump from the station exit. It was intended that this, the last of the many homes of the Rangers, should have been formally opened on Saturday, but the British workman, who is responsible for so much in these days, could not make it convenient to complete the undertaking, and the ceremony stands postponed until November 2.

The ground is most pleasantly situated, and will be a splendid lung for London.

The arena will be one of the most compact and well-equipped grounds in the neighbourhood of the Metropolis. But as this new sporting enclosure is described in our En Passant columns I forbear to devote this article to the same subject.

It must suffice to say that Queen’s Park Rangers have at last obtained permanent headquarters, that the club will now take their football seriously, and that people will flock to the new ground in the new future even more than at the present.

There were 12,000 enthusiasts round the rails on Saturday, when in spite of heavy rains, the turf was wonderfully light and firm. There was sunshine, too, lighting up the landscape and the faces of representative teams, although Buick was not at centre-half for Portsmouth.

The game opened at a remarkable pace – as if the Rangers, sure of their stamina in the second-half, were bent on tiring the visitors as soon as they could.

In spite of the fact that Pentland and Skilton forced the game in thrilling fashion, “Pompey” responded nobly, and were the first to score.

The goal was a curiosity. For a technical infringement while charging, McDonald took a free kick on the touchline, and about 30 yards from the corner flag. While Shaw was trying to gauge the flight of the soaring centre, the ball struck the inside of the far post and rebounded to the other side of the goal in the net.

The “Queens” were not disturbed about being a goal in arrear at the end of three minutes. They are accustomed to this experience.

The left wing of Portsmouth was most persevering, but the home right retaliated in a more flashing style. McLean gave Pentland a nice pass. The ex-Rover of Blackburn dashed ahead and out-manoeuvred Walker by curving inwards. Keeping the ball well under control, he shot hard and low on the run.

Philip touched the oblique drive with his right hand, but could do no more than graze it – the scores being equalised at the end of eight minutes.

But Portsmouth had their full share of the game, Shaw fumbling one ground drive and Bowman lofting over the bar. Again the position was imminent with danger when Fidler mis-kicked, and White tried to relieve with the result that Smith netted, but he was offside.

But Shaw had not a sinecure, especially when Kirby, always laying well up, slipped past the backs. On my soul, it looked ‘the mint to a mite’ on a goal, Kirby being within four yards. But Shaw intercepted a high ball. He gave Kirby another chance, but Shaw’s extended right arm tipped the shot out: two wonderful saves.

Away went Pentland, but Dix returned, and tested Shaw with a drive into goal. Shaw saved and again fielded a ball from Bellamy, which he could only gather at the second attempt as the shot flew upwards from his hands.

Barnes, who could only have been just in play when Gittens gave him a neat pass, showed his heels to Digweed, and crowned his little burst of speed with such a takeable centre that Skilton scored with a rocket shot, the Rangers earning the
lead for the first time at the end of half an hour’s play.

Pentland and Skilton were ever a source of danger, and from one of their flying scuds Skilton screwed into goal, Philip being heartily glad to divert the ball at the expense of a corner kick. Portsmouth rallied again and were really difficult to keep in hand – their left wing invariably responding to the rushes of the home right.

Just before the interval Dix, coming inwards and putting the ball well in, looked so likely to do damage that Shaw impetuously yielded to the temptation to rush out, with the result that he became entangled with White, and both men were on the ground together.

Indeed, I think that three of the defenders were on the ground together – a proof, according to the Lord Mayor of London, that it was a good game. Probably Bellamy thought so as the ball bounded over to him, and there he stood alone with a tenantless goal before him. Is it any wonder that the record was two goals each at the interval?

On reversing, Portsmouth were eleven ‘Olivers’ asking for more goals, and once it seemed as if Kirby was going to walk the ball into the net, but his parting shot was feeble, and Shaw intervened at the exact moment to prevent Smith administering the final touch.

Yet only three minutes had glided away, when the Rangers regained the lead. Pentland made one of his crosses to the other wing. Barnes and Gittens joined in the argument. When Barnes shot, Philip saved by knocking the ball upward. Alf Gittens waited and headed into the net.

Again Portsmouth offered a desperate challenge, and nothing but great goalkeeping by Shaw when facing Kirby kept the enemy out. The game was splendidly fought out.

Portsmouth made gallant efforts to equalise, and Bellamy was sadly at fault when Dix put a beautiful centre across. The old Arsenal man shot over from close in. A centre by Bellamy preceded a severe attack on the home goal, and the pressure was not relieved until Shaw had saved from Kirby.

The Rangers played better in the closing minutes, Lintott being very active, and skilful work by Barnes gave Gittens an easy opening, but he made a poor effort and Philip cleared easily. Thus the best team in London won by 3-2. Bravo!

The moral of the match was that Queen’s Park Rangers owe their position to their forwards, and the puzzle suggested by the game was the cause of the present position of Portsmouth.

Really the football was excellent, full of life and change, and a credit to the Southern League.

Pentland has developed into a speedy outside right, who has more ways than one of getting to goal. Considering that many of the passes to him were either too fast or too far ahead he loomed large in the game.

In his new role of inside right Skilton bids fair to justify the judgement of James Cowan in placing him in that position. He has weight, pace, pluck, and power. While he can ply Pentland well it occurred to me that shooting is his forte. A goalkeeper needs to watch both feet of Skilton when he is within range, and especially the right. 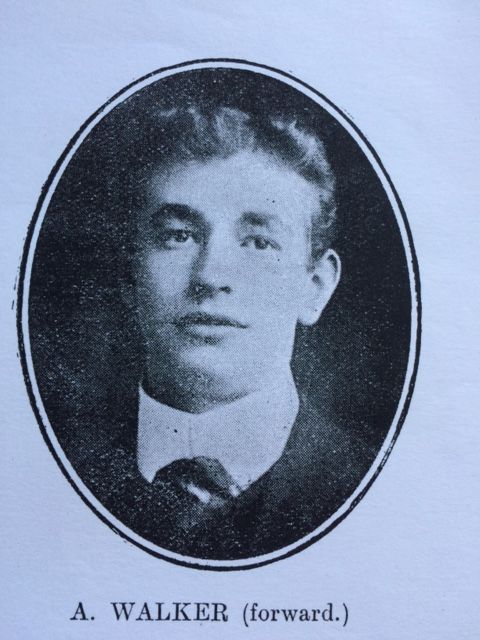 Walker was not quite so prominent as I anticipated. Although inclined to be slow in making up his mind he showed a capacity to distribute operations to both wings.

Gittens and Barnes are a mazy, tricky left wing, although they are apt to overdo their short passing. This was particularly apparent in the second half. Still, they are crafty and clever.

The vanguard is full of fire and flash. They are a well built five, and never hesitate to take target practice.

Mitchell and McLean are average half-backs, the outstanding figure in the line being Lintott, who I should say, is the best amateur in the country on the left.

Much more powerfully built than Robert Hawkes of Luton, he has a more robust method. But apart from his physique and capacity to go hard for the whole time – in the style of the half-backs of old – he tackles well, and makes the best use of the ball.

It is a small wonder that Gittens and Barnes take the eye when they have a man behind who glides the ball to them along the grass so neatly and truly that a small boy could forge ahead without losing a stride. To my mind Lintott and Gittens can pass better than any one else in the team.

The backs were uncertain. There are times when a ball must be taken as it comes, but White and Fidler never stand upon the order of their kicking. They do not trap or steady a ball. At least I cannot remember them so doing. The result was that they made mistakes. Moreover, they were apt to operate as if there was no one behind them.

Surely they can trust a goalkeeper of the activity and keenness of Shaw. The Scotsman can fill his area if the backs will give him room and trust him.

Altogether, the Rangers have a serviceable team, who play attractive football.’

Some interesting pen pictures of various members of the squad.

One thought on “QPR’s 3-2 Win over Portsmouth in 1907 – ‘Really the Football was excellent, full of life & change & a credit to the Southern League’”