It was an early start for my Dad and I to walk to get the special train to Burnley from Willesden Junction Station. It was about a 50-minute walk to the station from Askew Road.

Yes, we did have legs in those days and walking such distances was acceptable. The youngsters of today can just about make the walk to the family car!

It was a cold morning with much of the country recovering from heavy snow, which had fallen in the first week of the New Year. Fortunately a thaw had set in after the heavy snow, which had been up to a foot deep in places and on the 3rd January the Burnley pitch was still covered in three inches of snow.

It had also affected the R’s players who could not train for much of the week before the game due to frozen pipes and no electricity, but they had been able to play and beat Torquay 6-0 in their last match before the FA Cup game.

They were also boosted by the news that the goal machine Brian Bedford had recovered from bronchitis and would be fit to play. We were pushing for promotion that season and Burnley were top of the old First Division.

I was only 15 at the time and not having the wonderful memory of young ‘Kerrins’ who can relate such trips in minute detail, my own recollections are but brief! Incidentally, as it was 57 years ago I must be one of a small number still alive who had undertaken that trip.

I can recall boarding the usual old rolling stock trotted out for such ‘specials’ and the long journey to Preston to change for Burnley. No direct or high speed railways in those days and journeys were tediously long.

Changing at Preston is fresh in my memory as I received a direct hit from a spark issued by the steam engine that had dragged us up from London and spent the next few hours with one eye! Fortunately the next leg of the journey was uneventful.

Burnley in those post-war years was drab and L. S. Lowry looking, with misty conditions.

Fortunately my eye recovered to witness why we were a Third Division side and Burnley were top of the First Division.

Sat high in the old main stand we did at least see us unsettle Burnley after they had scored their opening goal on 7 minutes and we had high hopes for a good second-half.

It wasn’t to be as five second-half goals for the home side followed, but at least our long journey was rewarded with a late Bernard Evans goal.

The long trip home resulted in Dad and I walking the long trip back from Willesden Junction in the early hours of Sunday morning.

Young ‘Kerrins’ who had not made the trip and had not realised that I had gone, knocked for me next morning to be told I was still asleep in bed, probably still dreaming of the Bernard Evans consolation goal!

Burnley went on to reach the FA Cup Final, but were beaten 3-1 by Tottenham.

We missed out on promotion, finishing fourth whilst Ipswich beat Burnley to take the First Division title. Incidentally both Ipswich and Burnley lost ten matches out of their 42 games. How times have changed!

On December 9th there was an announcement for R’s fans in the Shrewsbury Town home programme: ‘It has been decided to organise a QPR party to travel by air for our FA Cup-tie at Turf Moor on January 6th next.

The Party will leave the Ground by private coach for London Airport, taking off on the B.E.A morning flight at 8.50am for Manchester Airport. A coach will meet the Party at Manchester and convey them to the Queens Hotel, Alderley Edge (a few miles south of Manchester) for lunch (3 course).

After lunch the Party will proceed by private coach to the Turf Moor Ground. 9/- Centre Stand tickets for the match will be provided.

A coach will meet the Party at the Airport to convey them back to the QPR Ground. 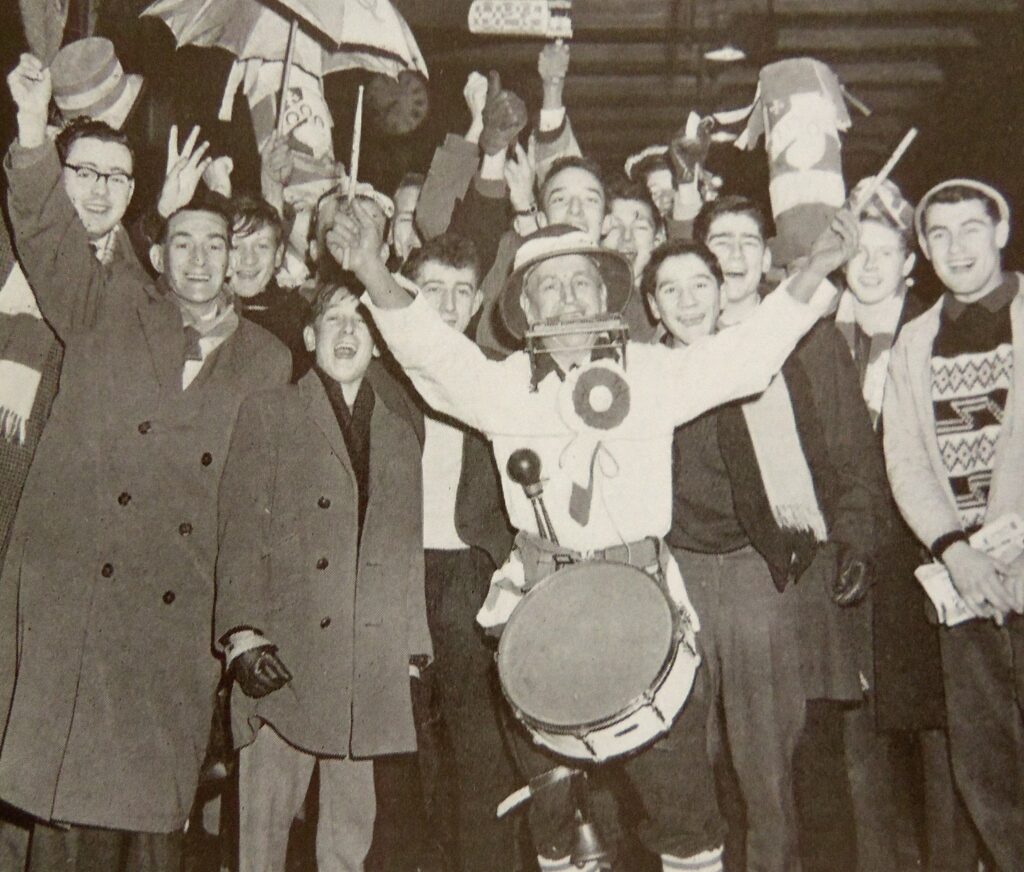 Coaches were also laid on, full details were to obtained from Mrs Daphne Biggs at the Clubroom. Stand tickets were available at the office, priced at seven shillings and nine shillings respectively.

The Crystal Palace home programme on 20th January included a report of the trip:

‘It was heartening to see a splendid turn-out of supporters to Burnley. Despite the grim weather of a few days previously, hundreds made their way to Lancashire by road, rail and air.

The rail party made their presence felt in no uncertain manner on arrival at Burnley, for headed by a one-man-band in the person of Jim Edmonds of Willesden, and much to the delight of the local inhabitants, they marched their way to the football ground.

The co-operation of the good-natured Lancashire “bobbies” did much to facilitate their progress at traffic junctions!

The coach party had a very fair journey, arriving in good time for the game. A few fog patches were encountered on the return trip, but some excellent driving by our regular “pilots” ensured that all were safely deposited at Shepherd’s Bush by 2am on Sunday morning.

Over at London Airport, the 20 air adventurers (including this scribe) had a nail-biting experience, for the scheduled 8.50am flight to Manchester finally left at 12.34, much to the ultimate relief of the twenty, who were beginning to wonder if they would ever see the game at all!

Again, some intrepid driving by our Cheshire coach driver over the hills and dales of Lancashire and we were safely in our seats just before the players came on to the field.

The return trip was less eventful and after an excellent (if none-to-leisurely) dinner at the Queens Hotel, we were airborne around 8.30pm and back at Heathrow at 9.20. A coach quickly conveyed us back to Shepherd’s Bush.

In all an adventurous, but none-the-less enjoyable day, despite the morning’s set-backs and made even more pleasant by the understanding and high good humour of the gallant twenty, who, although comparative strangers to each other in the morning, were all firm friends by the evening.’

(The pic shows R’s fans at Willesden Junction Station. The one-man band is Jim Edmonds who worked in the Canned Goods Department at the Heinz factory in Harlesden. Not aware of any infringement, but should there be a copyright problem then please email me at: stevenrussell67@icloud.com).