QPR took on Arbroath at Loftus Road on 1st March 1969. With Ron Springett, Mike Kelly and Alan Spratley all unavailable, Brentford agreed to loan Gordon Phillips for this friendly match.

Rangers had previously played them at Gayfield Park in 1952, winning the game 5-1. The following match report appeared the following week in the Acton Gazette:

‘The 4,000 Rangers fans who braved the cold for Saturday’s friendly with Arbroath were treated to a nine-goal spectacular, starring the inimitable Rodney Marsh.

Gliding over the pitch with arrogant ease, he grabbed a great hat-trick and delighted his loyal band of fans with a large measure of vintage Marsh.

Even bearing in mind the fact that Arbroath were not top class opposition, Marsh in this mood is a sheer delight to watch, displaying all the control and poise that has made him one of Britain’s top forwards.

Throughout the match Rodney showed his old positiveness in heading for goal and looked prepared to take on the whole Arbroath team if necessary.

There was none of the indecisiveness, which has marred many of his League displays this season, and the most encouraging feature was that he was obviously enjoying himself enormously. 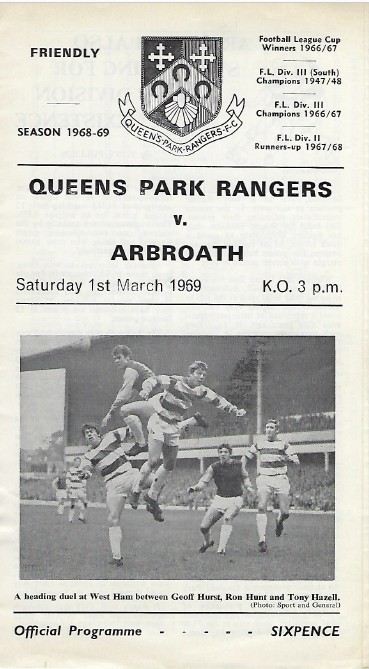 The two teams were brought together for the match by the Football League as both clubs had blank Saturdays having been knocked out of their respective cup competitions.

Coincidently, Arbroath are in a similar position to Rangers, fighting desperately at the rock bottom of the First Division.

Rangers started off at practice match pace, but were soon shocked out of their lethargy when the Scots took the lead after ten minutes through their left-half, Ian Reid.

Reid, an attack-conscious half-back, who I suspect would be pretty formidable in a better team, hit the ball home off a post after the Rangers defence had made a complete botch-up of clearing a corner.

The Scots were showing some clever touches and looked far the more dangerous side at this stage with Rangers’ keeper Gordon Phillips competently cutting off a series of attacks.

Phillips, reserve keeper for Brentford, was “transferred” for a day to Rangers because all three goalkeepers on the staff were unfit.

The goal setback stung Rangers into life and Arbroath keeper Jim Hodge made great saves from Marsh and Bridges before the equaliser came after 21 minutes.

And a great goal it was. Morgan, with room on the right-wing, floated over a lovely centre for Mick Leach to hurl himself forward and rocket a header just inside the post.

Six minutes later the R’s took the lead with an ice-cool goal by Frank Clarke, who as usual had been grafting hard and laying the ball off cleverly.

Again the goal came from a perfect centre by Morgan, finding Clarke just to the left of the goal. He controlled the ball superbly and then calmly picked his spot as the Arbroath defence rushed to cover.

Then came the goal of the match, which sent the Marsh idolisers delirious. Rodney collected the ball on the wing just inside the Scots’ half. He took the ball up to the full-back, then seemed to dart off in at least four directions simultaneously.

The defender, obviously as baffled as I was, simply fell over. Marsh bore down on goal, seemingly ignoring two lunging tackles, and as he got into the penalty area stopped dead in front of a wall of defenders.

He looked for someone to pass to and at the same time stubbed the ball hard and low into the corner of the net, leaving the keeper completely flat-footed. His broad grin showed that Rodney was as pleased as the crowd.

The remainder of the first-half drifted into oblivion, but five minutes after the re-start Rangers went 4-1 up with a strange looking goal.

During a goalmouth scramble, Leach flicked out at the ball and it curled in a high loop over the head of the amazed substitute goalkeeper Jim Williamson. As the ball landed, almost on the goal-line, Marsh following up blasted it home.

In the 58th minute clever thinking by Frank Clarke paved the way for Marsh’s hat-trick. The ball was punted hopefully into the Arbroath penalty area and Clarke rose high above the defence to head down into the path of Marsh who promptly lashed it on the half-volley past the keeper.

With a 5-1 lead Rangers began to ease up and the Scots, driven on by Reid, came more into the match. The Rangers’ defence seemed mesmerised by neat, close passing movement by the Scots forwards.

The ball came to Reid on the left-wing and a low centre found attack leader Jimmy Jack, who had shown some neat touches. A crisp low drive left Phillips helpless.

Clarke restored Rangers’ four-goal lead with a powerful drive after Barry Bridges had pushed back yet another inch-perfect centre by the tireless Ian Morgan.

Although obviously flagging at this stage, the Arbroath part-timers still attacked spiritedly. They pulled a goal back from the penalty spot after right-half Alan Kennedy had been chopped down by Clement as he bore down on goal.

Jimmy Jack slammed the ball home with a copy-book spot-kick to complete the scoring.

With five minutes to go, full-back Ian Watson had to come off with a badly cut leg. Gerry Francis substituted.

Although clearly below English First Division standards, Arbroath made a full contribution to an entertaining and thoroughly enjoyable match.

It was good to see the Rangers forwards moving so positively, but the defence, as usual, showed far too much indecisiveness and lack of craft.

What is badly missing in the Rangers’ machine is a top-class attacking half-back. Hazell and Harris, I’m afraid, hardly meet these requirements.’

Rangers went on to lose 1-0 at Forest the following Tuesday.