Despite never seeing him play, Reg Allen is a legend of mine, and arguably, Queen’s Park Rangers’ greatest ever goalkeeper.

Vic Gibbons’ long awaited book: ‘Whatever Happened to Reg Allen?’ was published recently and he kindly forwarded me a copy. 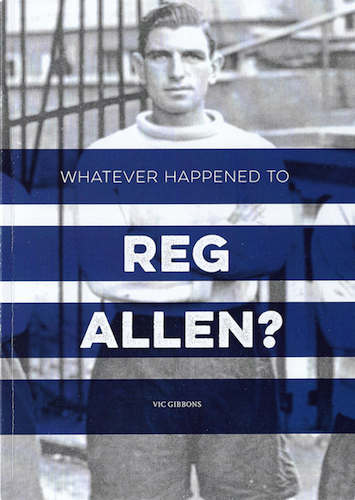 Vic begins his introduction as follows:
‘Whatever happened to Reg Allen? This has been a personal quest, which really began on the day of his benefit match between Queen’s Park Rangers and Manchester United in 1954.

Even QPR appeared to know very little of his whereabouts at that time. Their programme notes for the benefit game simply mentioned that Reg Allen was in hospital recovering from illness and the Club wished him all the best!

My search for the answer to the question could hardly be described as intensive during most of the years that followed, but the nagging question was always there and it was one that I would ask former QPR players over the years such as Arthur Jefferson who, like me still living in West London, could throw no further light on the matter.

It was really only the publication of an article in the QPR match programme by Derek Buxton concerning the club’s “best ever” five goalkeepers that the vexed question became a virtual obsession of mine.

The feature about Reg Allen in that article by Derek concluded that he had prematurely retired as a consequence of a serious head injury.

However, I was shorty afterwards able to establish from Manchester United’s records that his illness had little, if anything, to do with physical injury.

So then my research began in earnest. What really DID happen to Reg Allen? The answer is in the pages that follow,’

To order a copy of Vic’s very highly recommended book, please email him at: cromwellmanagement@hotmail.co.uk

3 thoughts on “‘Whatever Happened to Reg Allen?’ by Vic Gibbons”