Shepherd’s Bush Station opened on 30th July 1900 and was at that time, the western terminus of the Central London Railway.

The following article appeared in ‘Black and White Budget’ magazine on 11th August:

‘The opening for traffic of the Central London Railway ought to be the signal for further electric underground travel in London. As it happened the opening day was a breezy one, after a period of stifling heat.

Even the inside of an omnibus was tolerable, and the underground railways of the older patterns were endurable.

Hence the first contest between the new style of locomotion and the old was practically confined to the points of speed, cheapness, and general convenience. Novelty, of course, entered to some extent into consideration. 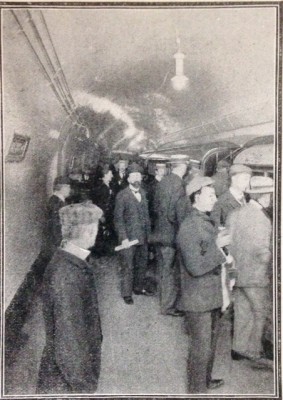 Omnibus drivers, missing familiar faces on their morning journey Cityward, comforted themselves with the reflection that regular customers had been but temporarily attracted by the new route, and certainly there were not a few passengers whose trips were of an experimental character.

However, the coolness, the cleanliness, the rapidity, and the cheapness of travel — 2d for eight miles – are bound to have appealed to those who took experimental trips, to say nothing of those whom the railway will benefit physically and financially.

The omnibus fare from Shepherd’s Bush to the Bank is 5d, or 10d, for the return journey. The workingman obviously will not pay 10d when he can travel the same distance more quickly for 2d and the clerk will not, for the same reason, refuse to be carried for 4d.

The line has already been nicknamed the “ Refrigerator” on account of the cool, breezy atmosphere.’

(The above pic accompanied the article and the caption reads: ‘The first passengers to leave Shepherd’s Bush Station.’)