Stan Bowles made his debut for the R’s on 16th September 1972. The ‘Bush Telegraph’ programme notes welcomed him to the club:

‘Welcome to Rangers, Stan – Rangers hit the headlines last week with our purchase of Stan Bowles from Carlisle United for a new club record transfer fee of £100,000 (£112,000).

As we go to press, Stan is scheduled to make his debut today and we feel sure he carries the good wishes of all Rangers supporters as he goes out onto our pitch for the first time.

Stan has not had the smoothest of careers in football to date and the £100,000 is not an easy one to wear. Let’s forget his transfer fee from now on therefore, and simply look on him as a good player joining other players of equal value. Good luck, Stan!’ 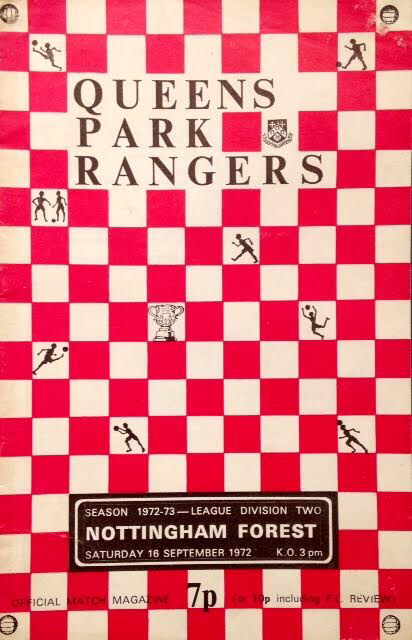 ‘I sometimes wonder if some people will ever learn. For example, there’s one sure way to kill off a promising professional – tell him he’s a carbon copy of another player.

Ask Peter Marinello what he thinks of his “Scottish George Best” tag, or Alan Wilks about his “as good as Marsh millstone”. For the sake of a good headline, and a vague “angle” Stan Bowles is this week’s Rodney Marsh.

He scored a good goal with his head, laid on another for Don Givens, and did a lot of good running, most of it spoiled because no one in the team was used to his positional sense. He also hit the bar from five yards.

Uncanny isn’t it? On the strength of a sound debut performance this man has set up for crucifixion. You see it works like this. This week he scored a goal and created a few nice headlines, but if he drops off next week, or the week after – as he well may in trying to settle at a new club – then the sharks will be on his back.

“This boy’s no Marsh,” they’ll scream. “Rangers will have to look elsewhere,” they’ll say.

So let’s lay the ghost of Rodney Marsh once and for all. He’s gone – kaput – passed on. He’s no more a part of Rangers than Brian Bedford or Les Allen.

The match itself was a disappointment. Rangers – never near their best – destroyed a drab Nottingham Forest side who never displayed any intelligence in attack or real bite in defence.

Rangers will not see many worse sides than this at Loftus Road, this season. It could be that Forest just had an off-day, when faced with the skill, style and fluency of Rangers, but I doubt it. Their position in the table flatters them.

Looking back through my notebook I can recall only three worthwhile Forest attacks. During one of these George Lyall’s tremendous shot hit the near post.

For the rest of the game Rangers ran rings about them, despite the fact that Gerry Francis, Terry Venables, and Tony Hazell, all had off-days.

The first goal arrived almost while the notes of the opening whistle were drifting round the stadium. A jinking run by Francis through the massed defence saw Bowles, with virtually his first touch of the ball, loft a cross to Givens, who rose to head it home.

In the 32nd minute Bowles got into the act. McCulloch – one of the best “target men” Rangers have produced, forced his way through the defence and crossed to Bowles, who neatly headed the ball over Barron and into the net.

Rangers third, in the second-half, was a travesty. Salvage raced up behind a defender, who had turned to pass back to his ‘keeper.

McCulloch moved to cut off the return, and as the defender turned again Salvage pushed his foot forward, flicking the ball on to McCulloch who rounded Barron for an easy score.

There is no doubt that McCulloch was offside, the only question remaining is whether the defender touched the ball as it sped forward. Even this would still leave McCulloch in an offside position when Salvage pushed the pass. Perhaps the referee and linesman were unsighted and felt that it was in fact a back pass.

Rangers, before and after this had many chances to increase their score, Evans was too slow, having beaten the ‘keeper and his shot was blocked on the line.

Bowles hit the bar following a corner. Salvage, running clear on the left struck a fierce shot into the side netting, and Barron saved brilliantly from a McCulloch header.

A sound performance against mediocre opposition, with Givens and Clement taking the honours.’

Rangers went on to get promoted to the top division, with Stan notching up 18 league and cup goals from his 39 appearances.

(My thanks to Bernard Lambert (aka ‘Kerrins’), for sending me the match report)