The R’s previous encounter with St Mirren was on 13th August 1983. Rangers lost that game 3-2, with goals from Clive Allen and Simon Stainrod.

‘Goals from Walker and McDowall in the second-half of St Mirren’s first home game of the season, left the fans reasonably satisfied if not totally convinced about the Love Street revolution.

They were convinced of one thing though Saints have a “winner” in left-back Tom Black. He’s fast, tackles strongly and distributes the ball well. 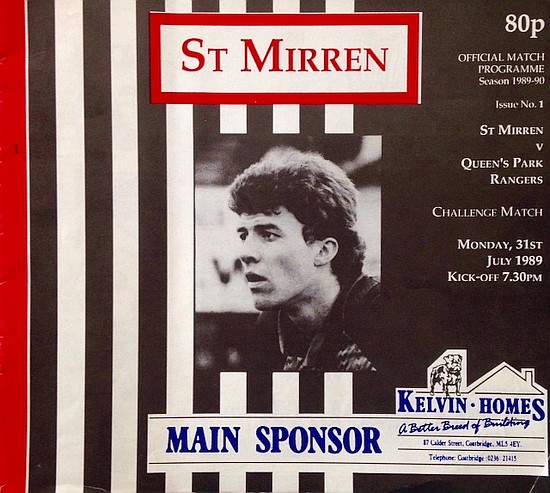 He capped a fine display with a mammoth 60-yard pass, which pressured visiting sweeper Paul Parker, and Kenny McDowall’s persistence earned him second equaliser. Yes, Saints had to come back twice to get a result.

Trailing by a Nigel Spackman goal at half-time, they equalised through Walker, who headed a Weir free goal across for McGarvey to head it back to him, fooling the defence.

Rangers’ second goal had “farce” written all over it. Three players appeared offside when the ball was played into the Saints’ area, but Clarke calmly drew Les Fridge and squared to Wright.

The former Aberdeen player missed his kick two yards in front of an open goal, but managed to stab the ball home off a post at the second attempt. It was only justice that Saints levelled again.

Hit by injuries, Fitzpatrick was forced to bring McDowall and McGarvey on from the start, and both looked lively. McDowall worked very hard and earned his goal.

Roddy Manley, Saints’ other big money close season signing had his left wrist in plaster after damaging two fingers against the IOM Select last week. That might have explained his early hesitancy, which allowed Colin Clarke to out-jump him easily and supply the pass for the first goal.

After that however, the former Falkirk man showed a far more positive attitude and was looking good when he was injured in a tackle and limped off after an hour.’

Two days later the R’s travelled to Falkirk and then completed their Scottish tour at Dundee on 5th August.

(My thanks to Gordon Macey for his assistance)