Alan McDonald sadly passed away five years ago today. As a way of commemorating him, I’ve reproduced part of an article, which was written by Michael Wale for a January 1987 match programme:

‘And so it is with Alan McDonald. Just at the time the increasingly putrid tabloid press encircles our players like vultures, spreading their messages of doom, Alan signed a three-year contract with the R’s.

“It’s for another three seasons” he enthused to me. “That is after this one is over. I said beforehand, that is before the talks over the contract, that I was happy at QPR, and my family are happy for me to be at QPR.”

“If other players have grievances with the club it is nothing to do with me. I have been here for seven years and always enjoyed it. It would be silly to make a move and then maybe find yourself not so happy in the long run.”

This is not a junior player speaking, but a man who has returned this season from playing in the World Cup, and having a particularly fine game at that level against Brazil.

“We have been playing well, but not getting the results against some of the best sides. I feel that all we really need is a couple of results and we will be on our way. On our day we will give anyone a good match.” 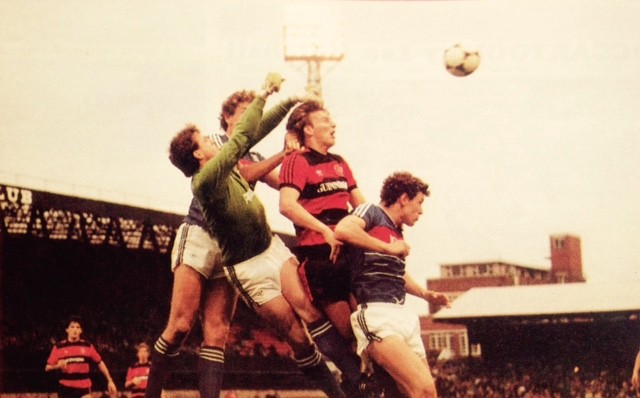 That day could be this afternoon when we are playing one of the top teams, against whom we seem to do so well. It was always thus with Rangers, even in our lower days, it was the lesser teams we couldn’t seem able to bring ourselves to beat.

Still, as Alan McDonald points out, there is a poignant lesson to be learned from Everton: “About two and a half years ago they were in much the same position we find ourselves in. Then they got a result or two, and that season were at Wembley and zooming up towards the League Championship.”

In sport nothing is certain. Otherwise why would anyone bother to go to the races, to a football or rugby match? It is the glorious uncertainty that makes the adrenalin flow.

The great thing is never to drop your head, be you a player, or a supporter. All I find on my journeys, when I meet supporters, is a great puzzlement over why we are not doing better. As they all say: “We’ve got the players.”

And it’s a view one of those players, Alan McDonald, endorses: “The players themselves are getting on very well together. We’ve got a good spirit going. It’s all right when you are winning match after match, but it’s in a position like ours that you need a good spirit. And it is certainly there.”

“And I agree that we’ve got the players at the club, so I don’t see why we won’t get it right.”

For Alan himself these past few weeks must have been traumatic because he had to return from the rarefied air of Mexico and striving for Northern Ireland in the World Cup to everyday life in the Football League, albeit in the English first Division.

“Yes, sometimes it was very hard mentally to get myself going because I’ve been playing football non-stop for eighteen months, but I’m quite all right now.”

And it is interesting to note that he is still in regular communication with Ian Stewart, who was with him at Rangers and is still with him in the Northern Ireland squad.

“We ring each other up regularly. He had a cartilage operation about two weeks ago, but hopes to be back in regular training by now. He is happy at Newcastle, but his contract is up at the end of the season, so I don’t know what he’ll choose to do then.”

“As far as Northern Ireland is concerned, we’ve got April to look forward to when we play England and then Yugoslavia in the European Championship. Both games are at Windsor Park.”

“But right now all I’m thinking about is Rangers; there’s plenty of time, plenty of matches to go yet. My main priority at the moment is to help get QPR clicking again.”

Let us all take Alan McDonald’s attitude as the mood for the New Year.’

Alan McDonald, a true QPR and Northern Ireland legend who will never be forgotten.