Tony Ingham sadly passed away seven years ago today. Dennis Signy wrote the following tribute to the QPR legend for issue 13 of the Club newspaper, ‘Bush Ranger’ in 1989:

‘When Tony Ingham joined Leeds United in 1947, he was earning the princely sum of £6 a week.

And the original contract for the Yorkshireman is on display in the re-named Rangers restaurant – the Tony Ingham Suite – along with pictures of his record 514 league appearances for the club, 628 in all.

Tony, who celebrated his 64th Birthday by watching his beloved Superhoops in action against Arsenal, is like ‘The Man Who Came to Dinner’. He arrived at Rangers as a player 39 years ago…and has never left.

When the Top Club restaurant, which seats 110 people, was “done up”, chairman Richard Thompson decided that it should be named after the man who deserves the title: “Mister Queen’s Park Rangers.” He is a Top Man. A Top Ranger. 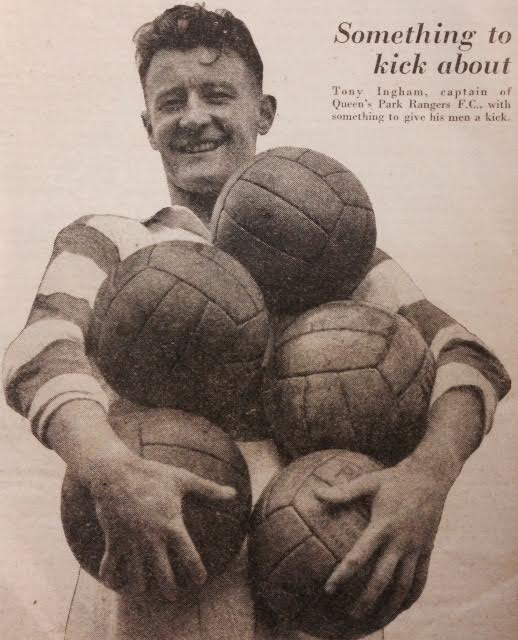 Harrogate-born Tony joined Rangers for £6,000 in 1950. I think they have had their money’s worth!

He will perhaps best be remembered for his full-back partnership with Pat Woods. I remember writing “like Marks and Spencer, it was Woods and Ingham for the R’s for years.”

Not many players get a suite named after them. Considering he was ready to retire in 1962 – Alec Stock persuaded him to stay on as Commercial Manager – Tony Ingham deserves the honour.’

(The above pic is from my collection)