The match kicked-off at 11am and a souvenir programme was produced, price 6d, which included the following introduction to the R’s team:

‘We welcome to Bristol this morning the football team of Queen’s Park Rangers’ Supporters Club and, in doing so, would like to extend to the QPR first team our hearty congratulations upon winning the Football League Cup and the Third Division Championship – a very impressive ‘double’. Rangers’ Supporters’ team have also had some exhilarating times recently.

Formed in season 1956/57, the highlight of their history was a tour to Holland during Easter 1966, when they twice appeared before crowds of 35,000 spectators! 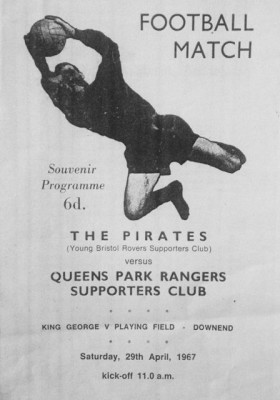 Like the Pirates, their first taste of competitive soccer was in a local Sunday League. Then they became founder members of the National Federation of Supporters Clubs Sunday League in 1961.

In 1962/63 their first team reached the final of the Lewis Cup, but lost 2-1 to Manchester United.

Last season was QPR Supporters’ most successful to date, their first X1 being league runners-up, and their second string marching off with the Falkland Cup by beating Charlton Athletic 1-0 in the final.

Our two supporters’ teams met earlier this season prior to the QPR v Rovers league match on 3rd December last. The Pirates won that match – played on a pitch next to Wormwood Scrubs Prison – by 3-1.’

Rangers won the match 2-1 with goals from Geoff Wiles and the team captain, Dennis Samuels (Sammy).