Earlier in the season the R’s had beaten Southend 1-0 at Loftus Road. This return reserve match was played at Roots Hall on Wednesday, 7th February 1962. The Southend line-up included former Rangers player, Pat Kerrins at No.6.

The following match report comes from a local newspaper:

Smith, with Jimmy Greaves-like opportunism, was always a big danger and on this form must soon come into the reckoning for a first team place.

Only the brilliance of Slack, the young Rangers keeper prevented United from trebling their score. 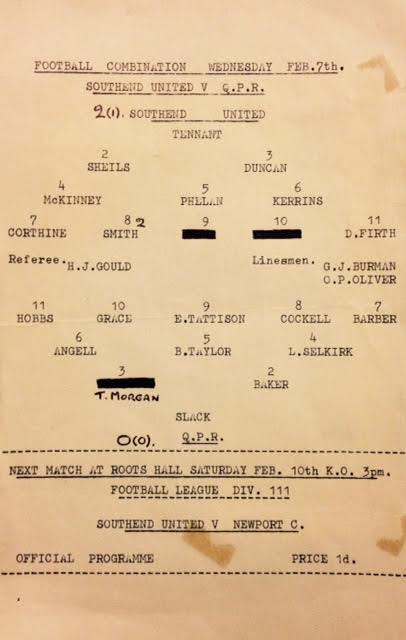 Arriving at the ground in driving rain, I began to regret leaving a nice warm fireside, but after 90 all-action minutes all thoughts of television and slippers were forgotten.

This was a Southend forward-line with fire and enthusiasm to make you forget the dismal conditions. Shooting from every angle and at the slightest hint of a chance, United had Slack covered in mud before the end of the first-half.

Two of his saves from Roy Goulden and Smith were in the miracle class, and when you consider how greasy the ball was, his display is even more commendable.

Well served by wing-halves Fred McKinney and Pat Kerrins, the home inside trio kept the Londoners’ defence at full stretch for long periods.

Goulden and Jones were always carving out openings and had wingers Peter Corthine and amateur Dave Firth, getting the ball through quicker to Smith, always lurking in the open space.

I doubt if even the almost unbeatable Slack would have stood a chance against this lad’s cannon ball drives.

Slack soon made his presence known when after only two minutes he leapt to his right and pulled down a good effort from Jones.

At the other end, two shots from Angell and Hobbs whistled inches wide of the United net, before Smith opened the scoring in the nineteenth minute.

A beautiful through ball from Goulden, as picked up in great style and with the coolness of a veteran Ray picked his spot to give the keeper no chance.

Goulden brought the best out of Slack with two powerful drives, and just before half-time, he turned a low Smith shot round the post.

After the break Slack made a first class one-handed save from a Smith header and then tipped a Corthine shot over the bar. But he had no chance with Smith’s second goal after 65 minutes.

Despite Rodney Slack being the Rangers hero that day, he only made one appearance for the 1st team and eventually moved on to Cambridge United in July 1962.