In 1930, the Topical Times issued a four-booklet illustrated collection of the top 100 footballers of the day.

The legendary R’s player, George Goddard, was featured on page 11 in Part 2 alongside; H. McLenahan of Manchester United, G. Reed of Leeds United and M. McGregor of Falkirk. 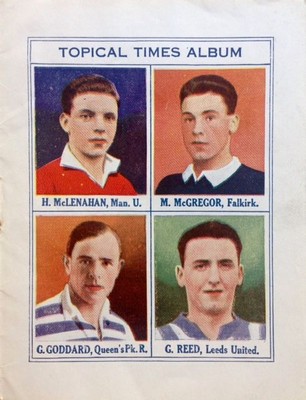 The players were displayed on one side of the booklet and their individual pen-pictures were shown on the opposite page.

‘G. Goddard: Queen’s Park Rangers – Centre forward. Height, 5ft 9 and a half inches, weight 11st 7lbs. Born Gomshall. Goddard is a skilful leader, and with an eye for the main chance he distributes the ball well to his wingmen. A deadly marksman, he has topped the Rangers’ goalscoring lists every season since 1926-27, when he made his first appearances for the club.’