Taddy & Co. produced three sets of cards in their Prominent Footballer series; 1907, 1908 and finally 1913. This particular card is from the second series that was issued in 1908. 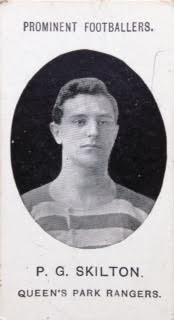 Percy Skilton was born in Harrow in 1883 but little is known of him. Apparently he was a railway clerk and has been described as a first class amateur player.

He scored on his Rangers debut on 30th April 1904 against Millwall and went on to make 64 appearances, which included the two FA Charity Shield matches against Manchester United at Stamford Bridge.

Skilton scored 22 goals during his five-year spell with the Rangers. His final game was at Clapton Orient on 26th April 1909.