Since they both entered the event they have been training for 8 weeks and both make their debut this coming week. 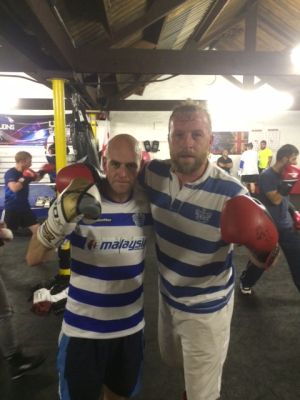 Danny, 34, is originally from Wembley and now lives in Watford. He sits in G block South Africa road, his first game was in 1986 and comes from a family of QPR supporters.

Danny said “it’s a great experience and a worthy cause, everybody has, knows or has lost someone with cancer and to raise money and make a contribution gives you a bit of self gratitude in knowing you’ve done something to help.

Jamie, 29, from South Oxhey is a season ticket holder in Q block. He is participating to raise money for the charity as he has had loved ones who suffered from the illness.

Jamie said “I love the sport so when the opportunity came up to take part I jumped at the chance. I have raised nearly ¬£1,700 through online and sponsorship donations for the charity and at the end of it I will be proud to say I’ve done this all in aid of a charity close to me.”

You can sponsor the lads by going to their Justgiving page:

Both of the boys thank you.

One thought on “QPR fans in charity boxing event”