Gabriele Angella looked promising throughout his brief spell. Perch was woeful and was run ragged. Chery was hiding for most of the game (which is a shame because I think he’s brilliant).

I would have preferred Ale Faurlin to of started, but I thought Massimo Luongo was fantastic. As for Rob Green, in his defence, it was an awkward ball for him to deal with, but an awful decision to take out their man, really na√Øve.

Alex Smithies is going to have to step up now, but in the games I’ve seen him play he’s looked skittish and unpredictable.

We looked off the pace in the first-half, but the game was all but won until Green fluffed it.

I know Greeno should have done better on their first goal, but why did Ned let the ball bounce out near the touchline? If he had headed it, smashed it into touch or even out of the ground then we wouldn’t be discussing a defeat. Basic rule of defending is: ‘DON’T LET THE BALL BOUNCE!!!’

Still, I would of taken our league position after six games but let’s make sure we put it right on Wednesday. 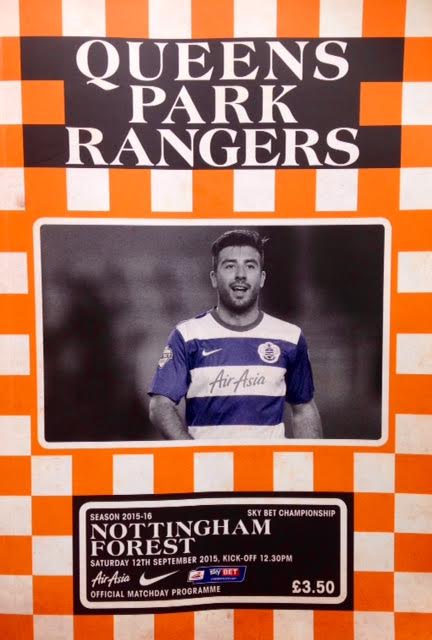 Dougie Freedman felt Nottingham Forest’s 2-1 win at QPR was the perfect response to the sale of Michail Antonio.

Three of Forest’s new signings were involved in the winning goal at Loftus Road, where Ryan Mendes combined with Chris O’Grady to set up substitute Nelson Oliveira. Forest’s first away win since February was an encouraging sign for Freedman’s new-look team in the wake of Antonio’s departure to West Ham.

“We had to sell our best player, if not the best player in the division, but I think we recruited very well,” Freedman said.

Charlie Austin fired QPR ahead, midway through the second-half, but it all went wrong for them when Rob Green failed to deal with Nedum Onuoha’s back-pass and pulled down O’Grady. The Rangers keeper was sent off, Henri Lansbury drilled home the resulting penalty, and Forest then went ahead.

“I felt we were the better side and deserved to win the game,” Freedman argued.

“We played some fabulous football in the first-half and took the sting out of the crowd. QPR had a 15-minute spell in the second-half, but even when it was 11 versus 11, I felt we were playing well. Obviously the sending-off helped, although I felt that – but for a trademark goal from Charlie Austin – we were the better team.”

“The substitution of Michael Mancienne (who was injured) upset things for us because we wanted to keep our shape. That, and the QPR goal, were set-backs, but we came back and the new lads contributed very well.”

Chris Ramsey was again left to rue his QPR side’s shoddy defending after they conceded two goals for the sixth time in eight matches this season. He said: “I thought the back-pass was poor and Rob made a decision, thought he could deal with it and unfortunately the guy (O’Grady) did well to keep running at him and cause him to bring him down.”

“Then, for the winning goal, I thought we could have defended that better. That goal wasn’t down to us being down to 10 men, that was poor defensive play.”

‘It’s very disappointing. At the time we had 11 players on the field I thought there was only going to be one winner. We were playing well at that stage. But disappointments happen and you have to deal with them during the game.”

“Unfortunately, we didn’t manage to keep them out. I thought we were going on to score more goals. But we went down to 10 men and didn’t cope with it as well as I would have liked us to, to be honest.”

Away from whether Greeno or Ned were most at fault for the penalty and resultant goal, I noticed that we haven’t got a natural leader in the team which was highlighted on Saturday, especially during the spell when we were down to 10 men. All the side entered panic mode, which a good leader could have helped stop.

It was apparent that should the game have gone on any longer we would have conceded more goals. Ironically, a Joey Barton type 100-percenter would improve us hugely.

We looked lost in the closing stages, which is a worry!

Not long into his debut, Gabriele Angella appeared to receive a nasty elbow, which resulted in him leaving the field for treatment and he even had to change his shorts. He did return with his head bandaged but unfortunately he was eventually forced off.

Rob Green made a very good save and grab in the first-half, but Forest really should have scored just before the break.

The match had gone flat but the R’s did have a decent ten or so minute spell in the 2nd half which lifted the crowd as did Charlie’s goal of course, but generally it was a very disappointing, well below par performance.

Not surprisingly most of the talk was about Rob Green’s straight red.

Shaun Derry was presented to the Rangers fans during the interval, his first return to Loftus Road for nearly two years.